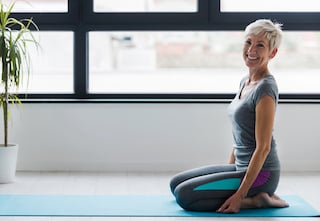 Perimenopause and menopause comes with a complex web of physical, psychological, and social symptoms.

The treatment usually prescribed by doctors, hormone therapy (HT), is controversial and not appropriate for some women. I won’t get into the HT debate here—Mark did a great job covering the pros and cons recently. Suffice it to say that HT isn’t the answer for everyone, and it’s not a panacea by any means.

Whether or not they choose to go the HT route, many women desire additional support during perimenopause and beyond. For the sake of keeping this post from becoming a novella, I’m going to focus on mind-body therapies today.

This is not meant to be an exhaustive list of nonhormonal options, nor is it meant to try to dissuade you from trying HT. That’s a decision you have to make for yourself with your doctor. The approaches below can be used alone or in combination with other modalities, including HT.

As with any medical-adjacent tools, if you are considering any of the options here, take the time to educate yourself, talk to your doctor, and find qualified practitioners to help you implement these practices.

A Note Regarding Research Evidence…

Because so many women are interested in complementary or alternative approaches, there’s a fair amount of research into nonhormonal treatments. There are also important limitations.

A lot of the randomized control trials—experiments that are best for establishing causal effects—are small. There is considerable variability in research design, so it’s difficult to generalize across studies.

Participants in these studies tend to be white and well-educated. Since there are cross-cultural differences in the experience of menopause, we shouldn’t assume that the findings apply to all women. Likewise, a lot of the research focuses on women with a history of breast cancer because HT is generally contraindicated in this population. While the results of these studies probably generalize to other women, it would be great to have more data.

Finally, vasomotor symptoms—hot flashes/flushes and night sweats—are studied more than other types of symptoms. Though they are the most common complaint, many women do not experience debilitating vasomotor symptoms. They might, however, experience mood fluctuations, depression, sexual issues, memory problems, and more. We know less about how these approaches might help those women.

Nevertheless, I’ll highlight some of the potentially fruitful avenues you might explore. When possible, I’ll focus on systematic reviews and meta-analyses. They pool the results of multiple smaller studies to help a more reliable picture emerge.

In CBT, individuals are encouraged to explore how their thoughts (cognitions) affect feelings, behaviors, and physical symptoms. With help, they change their thoughts or beliefs about a situation to help manage their responses and improve coping skills.

Although there isn’t a ton of research on CBT for menopause, available studies are very promising. Whether or not CBT reduces the actual number of hot flashes—and the data here are mixed—CBT should work by changing women’s perceptions of their hot flashes. Multiple studies do find that after CBT women view their hot flashes as interfering less with daily life. As expected, they are also less bothered by them.

Women who see themselves as having less control over their hot flashes also tend to experience more distress. Changing their perceived control could be an effective intervention for improving quality of life. Indeed, in one study, 95 women received either group-based or self-help CBT. After therapy they reported feeling greater control over hot flashes and having better coping skills compared to women in a no-CBT control condition. Further analyses showed that women’s beliefs about control and coping predicted how problematic they found their hot flashes to be. (Having more positive beliefs about how hot flashes affect sleep also helped.)

A cross-sectional study of 1744 women found that women with higher scores on a mindfulness assessment tended to report less severe menopausal symptoms. For women with higher life stress, this association was especially strong. The idea here is that when women are able to be present-focused and observe their symptoms without judgment, they are protected against some of the distress, and possibly the physical symptoms, associated with menopause.

Although some of the women in that survey are probably mindful by nature—lucky them—mindfulness is also a skill that can be learned and cultivated. Among the many reasons to do so, mindfulness and meditation training can apparently lessen menopausal symptoms.

For example, researchers assigned 110 women to either an intensive eight-week mindfulness-based stress reduction program or a control group. The women who received mindfulness training reported having less bothersome hot flashes, better sleep quality, less anxiety and stress, and greater overall quality of life compared to the control group. When the researchers followed participants over the next 11 weeks, these results persisted or became even stronger.

A few other studies found that women who receive mindfulness or meditation training report fewer and less bothersome hot flashes, improved sleep, and better psychological functioning, though the results have not consistently endured over time. However, when looking at more general relaxation training and paced breathing techniques, effects are minimal, at least for hot flashes.

An ethnographic study of nine female yogi masters concluded that they tend to skate fairly easily through menopause. The authors concluded that menopausal women should be encouraged to practice yoga. Of course, in addition to yoga, these yogi masters’ lifestyles included “healthy food habits, adequate sleep, and the use of nature cure techniques (i.e., fasting, detoxification, selection of suitable food products, and living in well-ventilated houses) that facilitated the art of living in tune with nature.” This sounds pretty great, but can we give really yoga all the credit here?

Probably not. However, two recent meta-analyses did conclude that yoga offers small but significant relief from symptoms of all types: vasomotor, psychological (including depression), somatic (including fatigue and sleep disturbances), and urogenital. Women also report better overall well-being and quality of life after receiving yoga training.

In one study, a group of breast cancer survivors received twelve weeks of yoga and meditation instruction, and they were encouraged to practice daily at home. Compared to women in a control group (no instruction), they reported fewer symptoms and improved quality of life at the end of the twelve weeks and again when asked three months later. A later analysis found that many of the effects were mediated by improved self-esteem in the yoga group.

Note that most of the individual studies are small, and they employ different types of yoga practices. This might be considered a strength insofar as different practices have been shown to work, or a weakness in that it’s not clear if one approach is particularly effective.

While promising, experimental studies have not yielded such favorable results. When women were assigned to “physical activity” conditions (often walking), some studies report improvements, but others find no improvements or even worsening symptoms (perhaps depending on women’s baseline fitness). Multiple reviews have concluded that there is no systematic effect of exercise, particularly not for vasomotor symptoms.

Does that mean menopausal women shouldn’t exercise? Obviously no. It’s clear that being active—or at least not being sedentary—is important for overall health, and it probably helps menopausal women through the transition. However, there isn’t enough research to know what types of exercise are most effective and when. Do the types of movement you enjoy and that make your body feel good.

A recent review concluded that acupuncture is effective for reducing vasomotor symptoms, both frequency and severity, as well as for improving quality of life. However, the reviewers also found that acupuncture was not reliably better than sham acupuncture where needles are inserted at points other than the prescribed pressure points and at a shallower depth—a placebo condition.

A handful of studies have shown that clinical hypnosis can reduce hot flash frequency and distress among breast cancer patients. Another study of 187 women without breast cancer found that women who received hypnotherapy had fewer, less severe, and less bothersome hot flashes, as well as improved sleep. These results were evident at the end of the five-week treatment protocol, and they remained or got stronger in the six-week follow-up period.

The Experts Weigh In…

In 2015, the North American Menopause Society released a position statement on nonhormonal management of vasomotor symptoms. Of the approaches discussed here, the only ones NAMS recommended based on the strength of the available evidence were CBT and hypnosis. Mindfulness-based stress reduction earned a “recommend with caution,” which means, “We think it might work, but the evidence isn’t conclusive.”

The others—yoga, exercise, relaxation and paced breathing techniques, and acupuncture—were not recommended. This does not mean they are not worth trying! It simply means that based on their standards, the evidence was not strong enough for the committee to conclude that they are likely to be effective treatments for vasomotor symptoms specifically. This says nothing about other types of symptoms, nor about general well-being or quality of life.

So where does this leave us? Each of these therapies shows promise for alleviating at least some symptoms of menopause. Moreover, all these therapies have the potential to improve overall quality of life, sleep, stress, and general health. While reading these studies, I did wonder whether some of the women felt better simply because they were investing time and energy in taking care of themselves. If so, is that a problem? I don’t think so. They are low-risk interventions with a lot of potential upside.

That said, these aren’t quick solutions. The effective mindfulness/mediation trainings included six to eight weeks of classes and multiple hours per week. Women practiced yoga for two to four months during the study periods. Hypnotherapy was five weeks or longer. It’s not clear what the minimum time frame is for each of these therapies to be useful, but they’ll certainly involve a time commitment that might not be practical for all women. However, yoga, mindfulness/meditation, exercise, and even CBT can all be practiced at home once you know the proper technique.

As I said at the beginning, this is not an exhaustive list of nonhormonal therapies. There are also various supplements that might help, as well as lifestyle modifications that most of you Primal-savvy readers are probably already implementing: eating a variety of nutrient-dense foods, getting plenty of sunlight, practicing good sleep hygiene, and nurturing social connections.

Whatever you choose, be patient. Don’t just focus on one symptom; focus on the big picture. Pay attention to how you’re feeling more globally. Consider that while an intervention might not hit its desired mark, it might help you in ways you didn’t expect.

Have you used mind-body techniques (these or others)? What’s been your experience? Share your insights and questions below, and have a great week, everyone.

Molefi-Youri W. Is there a role for mindfulness-based interventions (here defined as MBCT and MBSR) in facilitating optimal psychological adjustment in the menopause? Post Reprod Health. 2019 Sep;25(3):143-149