Hi friends. I hope you’ve had a wonderful week and that you’re enjoying the morning.

I’m sorry that I don’t have the usual Friday Faves post this morning, but we received devastating news this week. I mentioned last week that we took Bella to an ophthalmologist because her eye has been extremely swollen and inflamed. He put her on some meds and said he’d like to eventually get a CT scan to see what was going on. The meds hadn’t helped, and Sunday morning, her eye looked even more swollen and now had a bubble on the lens. I called the doctor again Monday morning, he saw her that afternoon, and was very concerned that it was worsening. He got her in for a CT scan and biopsy the following day.

After the CT scan, he called with the results: it’s a large tumor behind her eye and has invaded her eye, the bones in her face, and her nasal cavity. He didn’t remove the tumor or the eye because the tumor is so large, and it would require extensive bone surgery. Because the tumor was so vascular, they had a hard time stopping the bleeding from the biopsy. He said he’d call me back once the bleeding was under control, and we drove down there so we’d be right outside if she didn’t make it. We were sick with worry when it had been almost an hour, but thankfully, the technician was able to tell Tom at the door of the office that Bella had made it through the procedure and was recovering.

I feel like with all of the ‘Rona stuff, I’ve handled it fairly well. Our lives have been turned upside down but in the grand scheme of things, we’ve been alright. So many times during quarantine, I would tell the Pilot, “Thank God Bella is here” or “Look at how much time we get to spend with the dogs!” I’ve been sad/stressed about the school situation for the girls, but knew in my heart it would all be ok. 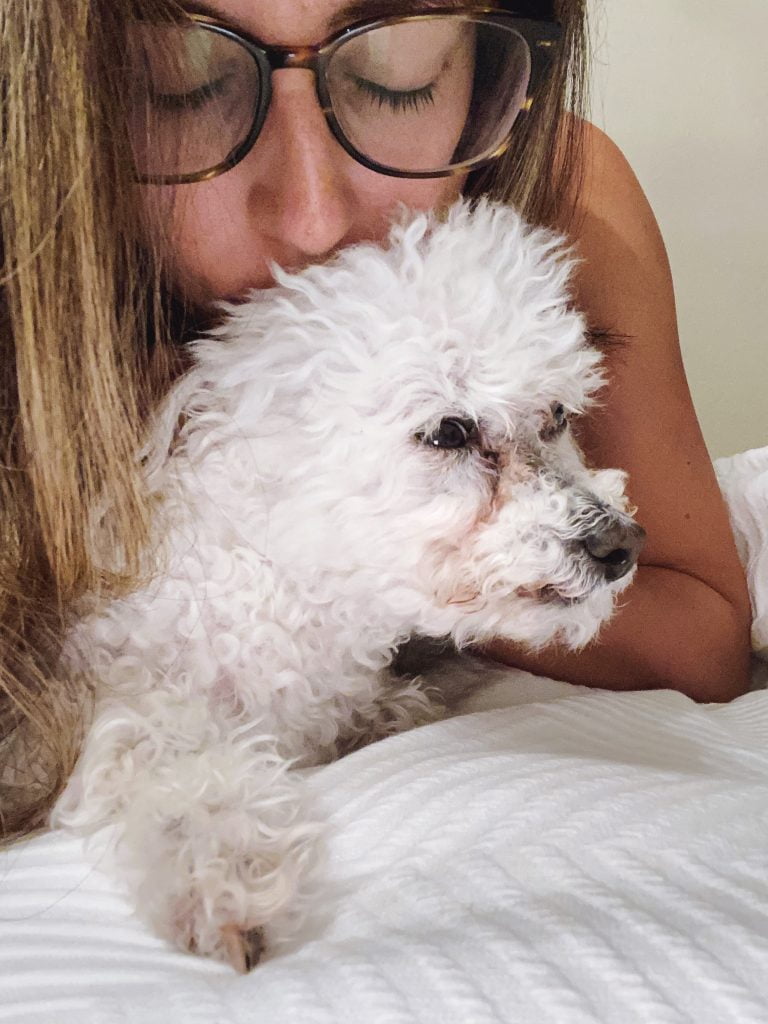 In the past three days, I’ve cried until I was sure I had no more tears left. I’m ok for a little while and then before I know it, tears are once again streaming down my face uncontrollably. My heart is literally broken and this feels like something too cruel and unfair even for 2020. I can’t imagine life without Bella and it’s a horrible reality I’ll have to know sooner rather than later. She’s been there with me my entire adult life: through our wedding, four deployments, the birth of our babies, moves, traveling, sickness, deaths in the family, everything. She’s slept in bed, curled up next to me, for the past 14 1/2 years. She’s always been more of a person than a dog… my person. The only thing that’s brought me a tiny bit of comfort during this week has been the fact that I’ve never taken her for granted. I’ve always told her and shown her how much I love her and how much she means to me. I keep reminding myself that the incredible grief that I feel is a small price to pay for the endless love and joy she’s brought into our lives.

We’re making the most out of the time she has left by spoiling the heck out her. (Caro is also really enjoying this new “eat whatever they want” thing.) I’ve been making them salmon, chicken for days, and showering her with belly rubs and kisses. We’ll also take the dogs on some outdoor adventures and walks when she’s had a little time to recover from the procedure. We’re determined to not let her suffer, so we’ll be watching her carefully for quality of life. For now, she’s still wagging her tail and begging for food, so that’s a good thing. <3

I’m sorry this post is the opposite of my usual Friday fare, but just wanted to share an update of what’s going on. Bella has always been a part of the blog and so many of you have said that you feel like you know this sassy chicken-loving gal. Thank you so much for those of you who have sent heartfelt and kind DMs and emails. I hope you know how much it’s meant to me this week.

Hope that you have a relaxing weekend ahead and I’ll see ya soon.

The post a Bella update appeared first on The Fitnessista.

Magnesium vs. Valerian: The Difference Between The Sleep Aids, Explained