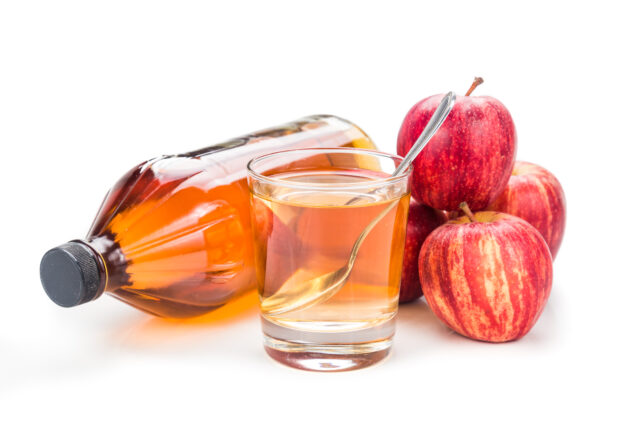 A while back, a friend was telling my wife Carrie and I about these apple cider vinegar gummies she started taking to deal with some persistent health issues. She wanted to know what I thought. You probably know that apple cider vinegar is rumored to have myriad health benefits. I’ve written before about how it’s likely to help people with diabetes control their blood sugar and improve insulin sensitivity. But it’s been a while since I poked around the scientific literature on this topic, so I decided to explore that today.

Apple cider vinegar has a long history as a traditional remedy for everything from dandruff to cancer. (Spoiler: there’s no evidence it helps with cancer.) Proponents claim that its healing properties come from the high acid content—mostly acetic acid, but also lactic, malic, and citric acids—as well the polyphenols, probiotics, and small amount of nutrients it contains. Depending on your particular issue, you might dab it on your skin, soak in an apple cider vinegar bath, or drink it.

Apple cider gummies have also become quite popular in recent years, as my friend can attest, in part because drinking apple cider vinegar can get old. It doesn’t taste great, and it burns on the way down. I’m not going to cover the question of whether gummies are more or less effective than other delivery methods today, but let me know in the comments if that’s something that interests you.

For today, I’m going to revisit the evidence for some of the top purported health benefits and see if there is any reason to run out to the market for a bottle of apple cider vinegar. Let’s go.

Scientists have known for decades that there is something going on with vinegar and blood sugar. A study back in 1988 showed that when researchers had subjects consume a sucrose solution either with or without vinegar (strawberry vinegar in this case), the resulting rise in blood sugar was significantly blunted in the vinegar condition.1 In another, individuals with type 2 diabetes or insulin resistance consumed a high-carb meal (white bagel, butter, orange juice) with or without an apple cider vinegar drink.2 With the addition of vinegar, participants experienced a smaller blood glucose spike, lower insulin response, and better whole-body insulin sensitivity, especially among the insulin resistant folks.

A similar study with type 2 diabetics found that vinegar attenuated the insulin and glucose responses to a high-glycemic index meal but not a low-GI meal.3 Some longer-term studies also suggest that taking apple cider vinegar for 2 to 12 weeks reduces fasting blood glucose and lowers HbA1c.4 5

So there is something there, but the phenomenon is still not well understood. The studies in this area are mostly small with inconsistent methodologies. Of note, it’s not clear whether there’s anything special about apple cider vinegar per se. The observed effects are probably due mostly to the acetic acid, which you’ll find in any vinegar in your cupboard contains. But this is still an open question.6

The science nerd in me is particularly interested in the mechanisms at play here. What about apple cider vinegar would affect blood glucose and insulin? It turns out the scientists have identified a bunch of different pathways that might be involved including:7 8

Pretty cool stuff. I’ll be keeping my eye on the research in this area.

Verdict: Probably helpful, but more research is needed to sort out the specifics. Watching your carb intake, engaging in everyday movement, and lifting heavy things will still have the biggest long-term impact. Apple cider vinegar might be worth adding to boost glycemic control and insulin sensitivity, but it’s never going to outpace those big drivers. Talk to your doctor if you’re taking insulin, metformin, or any other meds aimed at lowering blood sugar before starting apple cider vinegar.

Proponents of apple cider vinegar claim that it can improve lipid profiles and lower blood pressure. But does the evidence back that up?

Somewhat. A meta-analysis just published in 2021 reviewed nine studies looking at the effect of apple cider vinegar on blood lipids.9 Overall, they concluded that apple cider vinegar seems to reduce total cholesterol. It also lowered triglycerides, but only among people with type 2 diabetes, when they consumed less than one tablespoon per day, and when they took apple cider vinegar for at least eight weeks. There were no significant effects for HDL.

I wouldn’t put too much stock in these findings yet, though. The triglyceride reduction looks promising, and targeting high triglycerides is one of the best things you can do for cardiovascular health as far as I’m concerned. However, the whole “only when they consumed less than one tablespoon per day” is a bit of a head-scratcher. Let’s wait and see what happens with bigger randomized controlled trials.

As for hypertension (high blood pressure), there really isn’t any data to speak of outside a couple small studies on rats.

Verdict: Possible, but not worth getting too excited about yet.

Apple cider vinegar is a popular home remedy for skin issues from acne to dandruff to scarring. Many skin issues have bacteria, fungus, or a disruption of the skin’s pH levels as a root cause. Skin is naturally slightly acidic, having a pH around 5. Patients with atopic dermatitis (a form of eczema) have higher skin pH, for example, which gives rise to the characteristic redness and lesions.

Since apple cider vinegar is acidic and has antibacterial and antifungal properties, it makes sense that it would help. Currently, though, there’s little evidence that it works. Studies are few and far between with mixed results. Even still, the National Psoriasis Foundation10 and the National Eczema Association11 list apple cider vinegar as a home remedy to try. Anecdotally, it seems to help some people but not others.

What about apple cider vinegar for gut health?

Despite the hype, there’s no compelling evidence that apple cider vinegar is anything to write home about when it comes to:

Vinegar has been used in culinary and medicinal applications for millenia. It’s clearly safe in typical amounts. However, there are some potential drug interactions you should be aware of. Anyone taking medications that potentially lower blood sugar or potassium levels (certain heart medications and diuretic drugs) should consult their doctors. There are a few documented cases of folks experiencing hypokalemia (low potassium) after drinking large amounts of apple cider vinegar over an extended period. There’s no need to chug glasses of the stuff. Stick to a tablespoon or two per day.

It’s certainly no magic elixir, but there’s enough evidence to convince me that it’s probably beneficial for controlling blood sugar and insulin levels at least. Possibly it could help with certain skin issues and high triglycerides, too. Beyond that, I wouldn’t put too much stock in it. At least not yet.

That said, it’s pretty cheap. The worst case scenario for most folks is wasting a few bucks on a bottle of vinegar that they can use as a marinade or an effective household cleaner. Despite the lack of hard evidence, I still like a tonic made from hot water, apple cider vinegar, manuka honey, and lemon juice if I feel a cold coming on. I can’t prove that it works, but I also haven’t been laid up with a bad cold in a long time. Sure, that’s probably more to do with my overall healthy lifestyle, but the tonic isn’t hurting.

All in all, I’m not rushing to the store yet. What about you? Have you had any success adding apple cider vinegar to your wellness regimen? Tell us in the comments.