Sharing the books I read in April and if I’d recommend them! Still going strong with my goal of at least three books per month.

Hi friends! Happy Monday! How was the weekend? I hope it was fun and relaxing! Ours was a great one. P had a soccer game, the Pilot and I had a nerd date at a coffee shop (we each bring our computers and work, but we’re together, and then we grab a drink afterwards), I spend some time reading at the pool while the kiddos played, and we meet up with some friends for dinner. All the good stuff. This week, I have a tour at a kindergarten for P – it’s so hard to decide what we’re going to do next year – and am counting down the days of having the splint on my broken pinky finger. 7 down, 7 to go! 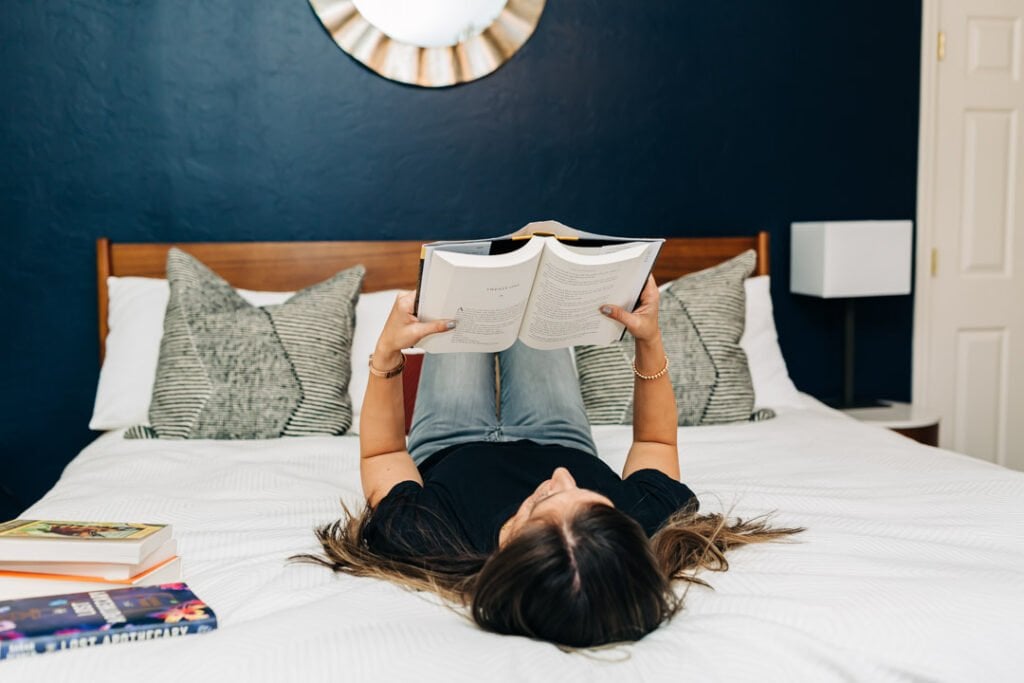 For today’s post, I wanted to share some reviews of the books I read last month. I’m still going strong at my goal of at least three books per month (one fun/fiction, one personal development or nonfiction, and one related to health or fitness in some capacity) and this month, I finished four. This is the first month this year that I had a couple of “meh” books, but I stuck with it.

Here’s how it all went down: 1. Beneath a Scarlet Sky by Mark Sullivan

This was the showstopper book of the month. It was the longest – just over 500 pages – but once I started, I was immersed and FLEW through it. It sucked me in instantly and is one of the books that you think of long after you turn the final page.

Beneath a Scarlet Sky is based on the true story of Pino Lella, a young Italian boy in WW2 who helps Jews escape to Switzerland. He later becomes a spy for the allies while working as a driver for a Nazi general. As you can imagine, some parts were harrowing and difficult to read. Others filled me with inspiration and hope, and there’s a beautiful love story intertwined with the more traumatic events. 10/10 would recommend.

Pino Lella wants nothing to do with the war or the Nazis. He’s a normal Italian teenager—obsessed with music, food, and girls—but his days of innocence are numbered. When his family home in Milan is destroyed by Allied bombs, Pino joins an underground railroad helping Jews escape over the Alps, and falls for Anna, a beautiful widow six years his senior.

In an attempt to protect him, Pino’s parents force him to enlist as a German soldier—a move they think will keep him out of combat. But after Pino is injured, he is recruited at the tender age of eighteen to become the personal driver for Adolf Hitler’s left hand in Italy, General Hans Leyers, one of the Third Reich’s most mysterious and powerful commanders.

Now, with the opportunity to spy for the Allies inside the German High Command, Pino endures the horrors of the war and the Nazi occupation by fighting in secret, his courage bolstered by his love for Anna and for the life he dreams they will one day share.

One of my business mentors highly recommends this book, so I was excited to read it. The premise is based on the concept that every successful company has a Visionary – the creative juice of the operation – and an Integrator, who is responsible for the behind-the-scenes implementation and organization of the ideas. Many times, businesses have a sole Visionary who is also trying to complete the roles of the Integrator, which doesn’t excite them, they fail to pay attention to the little details, and they find the work draining. True Integrators love what they do and are GOOD at it, which is why it can help a Visionary take their business to the next level.

This book really resonated with me because I’ve been simultaneously performing the roles of Visionary and Integrator since the beginning of the blog days, which has been necessary. That’s how ya get started! I do all of the creative aspects, which I love, as well as the behind-the-scenes implementation stuff and things that don’t motivate me (graphic design, invoicing, which you think I would love because it means someone will pay me but it’s the woooorrrsttttt, podcast editing and uploading, editing and uploading videos, analytics, SEO, etc.). It then continues to go on to describe what types of characteristics you should look for while hiring an Integrator and the hiring process.

This book was extremely informational to me but not totally relevant because I’m not ready to hire a full-time person yet. I work with some incredible contractors and VAs for my online businesses, but to hire a full-time Integrator, I would need someone to hit the ground running and would want to compensate them extremely well. I have some big goals this year, so we’ll see if I can make it there! It would be SO awesome to be able to focus on truly creating content and workouts, plans, and teaching.

Worth noting here that the Audible version is pretty dry. 😉 I would read the physical version. 7/10 would recommend. Helpful, but not the best business book I’ve read.

This book had stellar reviews, so I was excited to read it. Also, I was looking for a cupcake book (light and fluffy) after finishing Beneath a Scarlet Sky. Beach Read is about two bestselling authors who are polar opposites. January Andrews is known for writing romance novels, while Augustus Everett’s work tends to be more dark and depressing. They find themselves living as neighbors for the summer with looming deadlines and writer’s block, so they end up making a bet: they switch genres to see whose book will sell first.

The writing in this book was cheeky and fun, and it was a fast and breezy read. At the same time, some of the “dramatic portions” seemed a little superficial. (Like “Why are they fighting over that? Why does she cry in every chapter?”) It’s also called Beach Read so I think it was silly of me to expect anything super deep. 😉 Some tangents seemed a little out there but it was an enjoyable read, and I liked the ending, so I’d say 7/10.

I have the original Body Love book and ordered this one to find some new ideas and recipes. This book recapped a lot of the original information – it’s more of a low-carb style of eating, which isn’t for everyone but I like these types of recipes – and unfortunately, I thought the organization made the recipes harder to find. It’s segmented into different “plans” (21 day plans crafted for four different archetypal of women) which have the recipes for that specific plan. I don’t really want to follow the plans, just want new recipes, so instead of having a dinner section, I have to skim through each of the four plans to find all of the dinner options. I could see how this would be helpful if you wanted to follow the plan exactly, but for people like myself, it’s kind of a jumble. The recipes are all simple and healthy, so if you’re looking for some new inspiration, I’d check it out. I’d say 8/10.

So, tell me, friends: what books did you read in April? Any showstoppers lately?

Have a great day and thanks so much for stopping by the blog.

The post April 2021 Reads appeared first on The Fitnessista.

Why We Need Women in Leadership