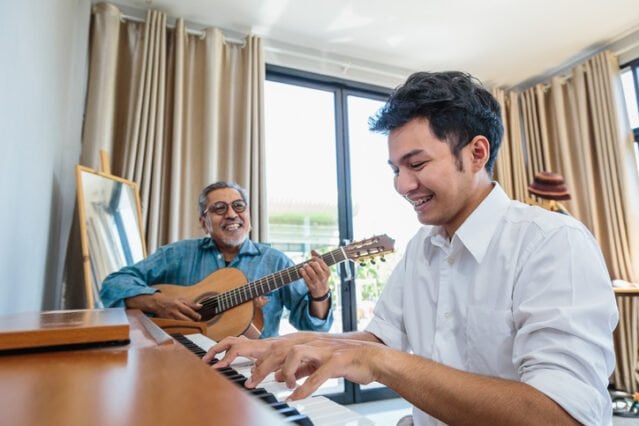 One of my biggest inspirations was my late father, Laurence Sisson. He supported our family as a painter, primarily water color paintings of New England nature scenes. His work ethic was insane as was his creative genius. But my most salient memories of him are not those spent in the art studio watching beautiful representations of nature’s glory appear before my eyes. No, what I remember most are the evenings spent around the piano.

He was also a great jazz pianist, and often took paying work as a musician when the times demanded it. During holidays, he’d play the classics. On quiet afternoons, he’d noodle on the keys. Piano music was the backdrop of the house. And, I’m convinced, playing that piano kept his brain nimble to the very end.

If you spend any time at all on social media, you’ve probably seen the videos of otherwise unresponsive Alzheimer’s or Parkinson’s disease patients lighting up when a favorite piece of music from their younger days plays.

There’s this one, where an old man in a nursing home on his last legs comes to life. After listening to some of his favorite music, he becomes incredibly responsive, answering questions about himself and his life. Music gives him access to the parts of his brain that were previously shut out, at least for a brief moment.

The most recent one I saw is of a former New York City prima ballerina with Alzheimer’s disease. When she hears “Swan Lake,” she motions to raise the volume and then launches into the choreography from her chair—the same dance she mastered and performed over 50 years prior.  Even as I’m writing this and picturing it, I feel tears welling up from the beauty of the moment.

Most of you reading this aren’t in that dire of a cognitive situation, but you can probably relate to the effect music can have on our brains. We’ve all felt the power of music. When that song comes on and catapults you back to some bygone era of your youth. When you hear an album and actually smell the smells, taste the tastes, and feel the emotions it evokes in you. Something powerful is happening in the brain, and we shouldn’t wait til degeneration sets in.

If we know there are certain lifestyle, dietary, and behavioral modifications that can improve the outlook of a patient with dementia, then enacting those changes before dementia arises will be even more powerful and effective at staving it off. Music is one possibility.

Playing an Instrument for Brain Health

We actually have evidence that playing an instrument is protective of brain health and function.

In one recent study, researchers asked 23 former orchestral musicians if they or any musician they knew had dementia. Dementia rates among the queried musicians were nonexistent, nor did any of them know other musicians who had the disease.1

Another earlier study had similar results, finding that older adults with at least 10 years history as a musician performed better on a battery of cognitive tests than those with no experience.3 They didn’t control for IQ but they did control for education attainment, which is a decent barometer of intelligence (though exceptions definitely exist).

What about more direct trials? Can we show that playing instruments can actually elicit changes to the brain’s function?

Recent research shows that music practice, which forces our brains to work in a completely different way than normal waking reality, is an important contributor to neural plasticity. Even just two weeks of piano practice elicits neuroanatomical changes to the auditory cortex in non-musicians.4 It can also reduce or prevent the age-related degradation of Broca’s area, a section of the brain partially responsible for speech production that’s often damaged in dementia.5 The same protective effect has been seen in the auditory cortex, which controls speech recognition among other things, of aging musicians.6 All these changes spell big potential benefits for people with age-related cognitive dysfunction, but there are also benefits for younger brains too.

Research has found that children who engage in musical training show increases in IQ, verbal memory, and linguistic ability, even when the control group is composed of kids with otherwise similar backgrounds (socioeconomic status, academics, etc) except for the music training.78910 This doesn’t prove that playing instruments changes the brain or improves its function, but it’s quite suggestive.

Flow doesn’t happen when you struggle. It doesn’t happen when you trip over your own fingers or have to concentrate so hard you start sweating and stressing.  Flow happens when you know the material and the instrument so well that you fuse with it and become one. When you lose yourself in the music and all sense of time. If you’re learning an instrument, you probably won’t reach flow very reliably. To trigger a flow state, you should play something you’re good at. Something that you can lose yourself in, whether that’s a Chopin prelude or a simple hand drum beat. It all depends on your skill level.

But hitting that flow state is one of the major brain benefits of playing an instrument. It’s instant mindfulness, where you turn off the churning brain for once and simply exist in the present moments as they unfold. If you’ve wanted to meditate but haven’t had any luck with typical sitting meditation, get to a place where you can groove or jam or play on an instrument for an extended period of time.

Playing an Instrument to Reduce Stress

One of the biggest impediments to brain function is chronic stress. A little stress can help—if anything, acute spikes in stress hormones like adrenaline or cortisol can momentarily heighten cognition and awareness. But chronic elevation of these hormones destroys cognition. Studies show that playing music can reduce stress levels.11  Furthermore, anything that gets you into the flow state will lower stress, almost as a rule. I could elaborate with even more extensive citations, but instead I’ll tell you about the drums.

I might not be that good, but man is my electric drum kit I keep in the office a stress release. I put earbuds in, fire up a rock song on my iPad, then put the headphones to the drum kit over that, and wail away for an hour and a half almost every night. A legend in my own mind (the only mind that matters). If you walked into the room while I was doing this, all you would hear is Pita pit a pitta TapTap softly. But inside the headphones, I’m killing it. Highly recommended.

Playing an Instrument for Happiness

No, that isn’t sexy. It’s not going to sell any online e-courses. You won’t get clout and “happy” can’t be quantified, even if you start citing neurochemicals. But happiness is . When you boil things down, most people will name “be happy” as a major long-term goal. It’s not everything, you need meaning and drive and a mission as well, but moment-to-moment happiness really does matter for brain health.

Playing an Instrument Is Magic

If magic exists, music fits the bill. It can change your emotions on a dime. It can conjure up vivid memories, even those previously calcified and inaccessible via normal modes of cognition. It can capture and even alter the energy of the room. It makes people move their bodies without realizing or wanting it. Music can’t be touched or felt, only heard; it’s real but intangible, abstract but verifiable. And if you are making the music and wielding the instrument, you become the magician.

Whatever you do, don’t wait any longer. Pick up that instrument you’ve been thinking about and get after it. Over the last few years I’ve picked up the piano and have been dabbling in the drums, but man, there’s a HUGE difference between trying to learn at my age and trying to learn as a kid. You want to talk about compound interest, learning music (or any skill, really) as a child is a relatively small initial investment that quickly accumulates value. And most importantly, it never loses value. You learn the thing when your brain is still physically developing and the thing becomes embedded in the physical structure of your brain. It’s almost impossible to forget a skill like that. I wish I had that with music. If you have that opportunity, take it.

Do you play any instruments? How has it affected your brain health, as far as you can tell?

Thanks for reading, everyone. Take care!

December Educator of the Month