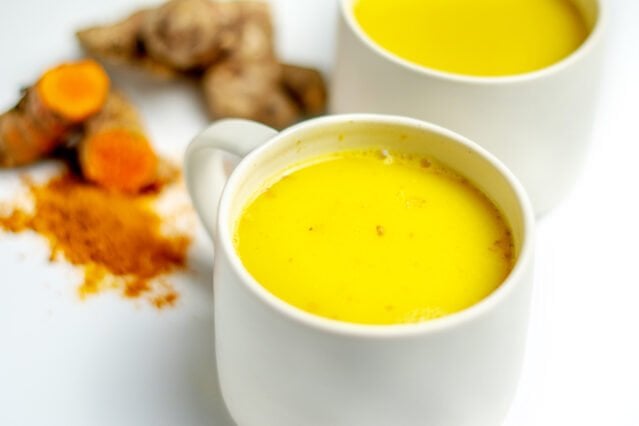 To call this beverage tea might be a little misleading. “Creamy Mug of Cozy, Warming Deliciousness” is more accurate. It just plain feels good to drink this lightly sweet, vibrant blend of heated almond (or coconut) milk, turmeric, ginger, cayenne and honey. Turmeric tea will perk you up in the morning, calm you down at night and soothe sniffles and sore throats. It’s also a really pleasant way to end a meal.

At first glance, the ingredients might not sound like a combination you’d want to drink. Something magical happens in the mug, though, and the result is richer than regular tea, less intense than coffee and oddly delicious. Turmeric is the dominant flavor and admittedly, one that takes a little getting used to. Although not spicy itself, turmeric’s slightly bitter, earthy flavor is the perfect backdrop for other spices, which is why it’s a main ingredient in curry powder. The ginger and cayenne in this tea aren’t overwhelming because they’re floating in creamy, turmeric-infused milk that’s been lightly sweetened. Turmeric is ginger’s mellow cousin and is a root used just as often for its bright yellow-orange color as it is for flavor. Turmeric powder is a frequent ingredient in East Indian, Middle Eastern, South Asian and Caribbean cooking and is also believed to have numerous healing properties. When cooking with turmeric, it’s most often used in conjunction with ginger and spices like cumin, cinnamon and coriander. Moroccan Chicken Casserole is one dish that benefits from turmeric’s flavor. If you’d like to use turmeric more often, you can also add extra turmeric to dishes that already have curry powder in them, like Butter Chicken or Beef Curry Meatballs. Or, after trying this recipe, you might just go through all the turmeric in your spice rack by brewing mugs of Golden Milk. Gently warm the almond or coconut milk on the stove.

In a mug, combine the remaining ingredients.

Drizzle a teaspoon of the warmed milk into the mug and mix until the liquid is smooth with no lumps. Add the rest of the milk and mix well. You can leave the pieces of ginger in the tea, or strain it out before drinking.

Looking for more turmeric inspiration? Try these recipes to add a earthy flavor to your next meal.

For more ways to use turmeric in your routine, pick up a canister of Primal Kitchen Collagen Fuel in Golden Turmeric.