A 52-year-old diabetic woman who had undergone recent PCI with a DES developed a febrile illness which was diagnosed as Dengue fever. She has been taking DAPT (Dual antiplatelet) meticulously to maintain her stent. Now, her platelet count has dropped from 1.5 and subsequently to 1 lakh. She is asking now, whether to stop DAPT or not? What is the risk of stent occlusion if she stops?

*Dengue affects 50-100 million people worldwide every year and one billion are at risk. CAD affects 5 % of the population that amounts to  350 million. As we fight CAD, 2 million coronary stents are implanted annually and at least one-third of them may be on DAPT at any time.

When a  global population is at risk of an infection that targets human platelets and another chunk of the same population in whom platelets are targeted with drugs, what is the Incident risk of overlap between these two groups? 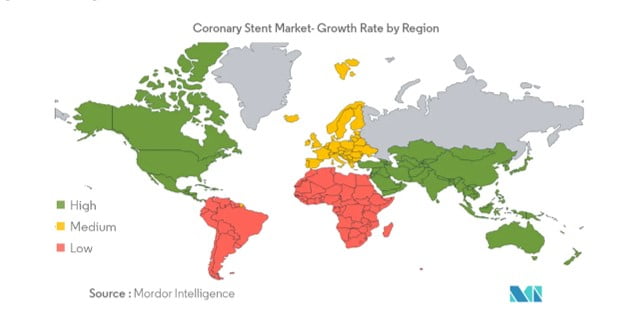 If you look at these two maps, I think we will not hesitate to call both Dengue and DES a global epidemic affecting the platelet function. The top one depicts the world stent market and the bottom Dengue prone countries

Mechanism of thrombocytopenia in dengue

The mechanism of thrombocytopenia in dengue is not clear. Both production at the marrow level and destruction in the periphery is attributed. The antibody-mediated NS (nonstructural protein) is the original antigenic sin  (Click to know more)

Meanwhile, DAPT paralyzes the platelet by blocking  P2Y12 and COX. It is obvious Dengue virus amplifies the antiplatelet action and increases the bleeding risk at any point during the illness.M

Bleeding periods is highly unpredictable. The late recovery phase seems to be critical for hemorrhagic risk.it can go up to  2 to 3 weeks or even a month. (When we don’t have data, only experience becomes data. )

How to manage Antiplatelet agents in post PCI patients with dengue?

While we have guidelines to stop DAPT during the need for emergency surgeries, the same can not be adopted in Dengue.(Curiously, we can stop DAPT without much fear, after all, dengue antigenic responses take up the role of antiplatelet agent )

Switching to other drugs like eptifibatide or NSAIDs is not an option.

When both Dengue &  post PCI epidemics are trying to match in numbers, I guess D³ syndrome (Dengue-DES-DAPT)  would soon become a significant clinical issue.

Now going back to the title question, Should I stop DAPT or not?

What about Heparin, Oral anticoagulation (OAC), usage in suspected Dengue?

Go back to basics. Heparin and OAC don’t affect platelet function. It is 100 % safe to continue.

Really? do you think so? No, coagulation physiology is not that simple. Thrombin and antithrombin interactions happen right on the platelet surface. Any antithrombin drugs do have some antiplatelet action as well. Extreme caution is required again. Withhold them unless absolutely indicated.

Fasted vs. Fed Training: Which Benefits Your Clients More?