For this week’s edition of Dear Mark, I’m answering a question that came in response to my previous post on teens and creatine usage. Should women take creatine? Are there any differences in creatine metabolism between men and women? Does creatine work the same in women? And, the age-old question, will creatine make women bulky?

I’m wondering if creatine is as helpful for women as it is for men. You don’t really hear much about it out there regarding women. What do you think? 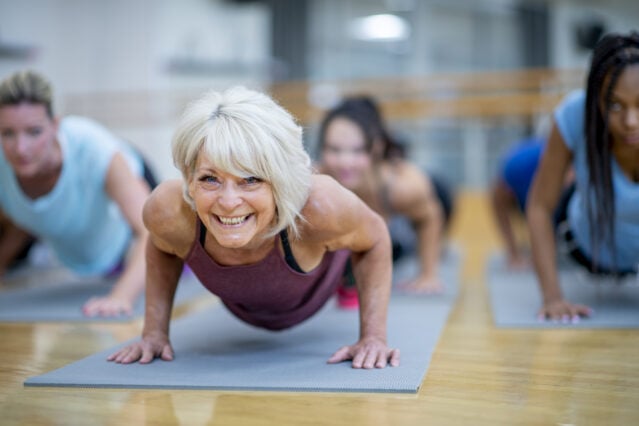 Ultimately, we are all humans. We all produce the same hormones, process the same three macronutrients, utilize the same micronutrients, and require the same nourishment regardless of whether we’re men or women.

However, there are measurable, objective differences between the average man and the average woman. We know, for instance, that even individual cells can be “male” or “female.” A kidney cell from a female looks and functions differently than a kidney cell from a male. The kidney still performs the same role in the body regardless of sex, but there are differences in the margins. Subtle nuances that have an effect.

So it’s natural to wonder whether creatine has the same beneficial effect in women that it does in men. Well, does it?

Article Summary show
Creatine for Women
What Does Creatine Do for Women?
Are There Any Sex Differences in Creatine Production, Storage, or Metabolism?
Do Menopause, Menstrual Cycles, or Pregnancy Change Creatine Metabolism or Dosing?
Creatine in Pregnancy
Creatine and the Menstrual Cycle
Post-menopause
Will Creatine Make Women “Bulky”?
How Much Creatine Should Women Take?
References

To answer your question: yes, creatine is helpful for women. Just like it does in men’s muscles, creatine helps provide energy for women’s muscles in the form of ATP, or adenosine triphosphate.  For short, intense bursts of speed or strength—if you’re going to be lifting cars off children, sprinting to avoid a giant boulder rolling your way, or eking out a few extra reps at the end of the set, for example—it behooves you to be able to generate more ATP quickly. Creatine facilitates that.1

What Does Creatine Do for Women?

Studies have shown that creatine has many of the same effects in women as in men:2

Plus, creatine doesn’t just enhance physical performance. Creatine is also found in the brain, where it maintains cognitive function by recycling ATP to maintain energy stores:

Are There Any Sex Differences in Creatine Production, Storage, or Metabolism?

There are differences in how men and women process and store creatine.

Since women have less room to store creatine, and the storage depots they do have are “fuller,” some researchers have hypothesized that women may not respond as strongly to creatine supplementation. The evidence doesn’t really support this, though. Creatine still works in women, as I discussed in the previous section.

Menopause, menstruation, and pregnancy are three uniquely female physiological processes or states. How does creatine affect them?

Pregnancy reduces creatine stores, not because the body is triggering a self-defense mechanism that sheds “dangerous” creatine or anything, but because it’s used in growth and development of the fetus. You need extra creatine during pregnancy. A woman can get it through dietary sources, like red meat or lean white fish, or she can take a little extra through supplementation.

Supplementation hasn’t been studied in pregnant human women, but in animal models, creatine supplementation protects the fetus from certain types of brain damage. Human studies show that low creatine levels during pregnancy predispose babies to low birth weights, so I’d imagine it’s quite safe (and possibly important).4 As always, talk to your doctor before adding any supplements during pregnancy.

Creatine and the Menstrual Cycle

Combined with resistance training, creatine supplementation is a promising strategy for counteracting some of the negative effects menopause can have on muscle tissue, strength, physical performance, and muscle atrophy.

Probably not an issue. Whereas creatine has consistently been shown to increase the muscle hypertrophy response to resistance training in men, the same thing doesn’t really happen in women who take creatine. They don’t gain the muscle water weight that men do, and they don’t get the boost in muscle size—at least not any more than they’d gain from just lifting weights. One study in women found that creatine usage combined with resistance training increased fat-free mass without changing actual bodyweight.5

Women still derive a lot of performance benefits from creatine usage, seeing boosts to both strength and power without a big change in size.

How Much Creatine Should Women Take?

Dosing guidelines are the same as men’s: 5 grams a day.

If you want to speed creatine uptake in the muscles, you can do a “loading phase” of 20 grams a day (split up into 4 doses) for a week before dropping down to 5 grams a day.

Make sure to drink extra water, as creatine requires water for storage in the muscle, albeit not as much in women.

For all the women out there, have you ever tried creatine? Would you?

Thanks for reading, everyone, and be sure to throw in any questions you might have down below.