Home›Health Care›Fasting with a Cold: How Does Fasting Impact Viral and Bacterial Infections
Health Care

Fasting with a Cold: How Does Fasting Impact Viral and Bacterial Infections 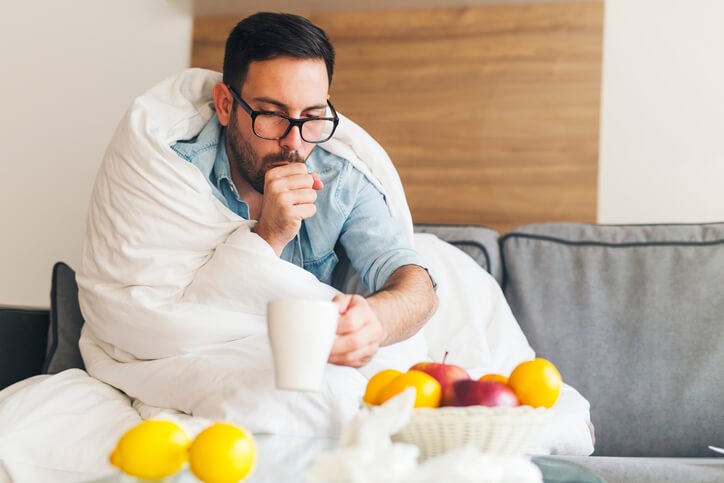 Fasting is a great tool for so many things. You can use it to regulate food intake and lose body fat. Fasting can help you shift body composition, normalize your appetite, and gain control over your relationship to food. Many people report cognitive enhancements from fasting, and it’s a surefire way to speed up the transition into ketosis and full-blown fat adaptation. There’s strong evidence that we look, feel, and perform best skipping the occasional meal—that it’s the evolutionary norm for humans not to have constant, unceasing access to food. After all, we didn’t always have 24 hour grocery stores and fast food restaurants. But what about fasting with a cold?

And what about intermittent fasting and the immune system? Should you fast at all when you’re sick? What about fasting with the flu? Or how about bacterial infections—can fasting help with those? These are actually some of the most common questions I receive. Because intermittent fasting seems to help with so many other conditions, it makes sense to wonder about its relationship to the immune response.

Instantly download our FREE guide: 10 Foods You Should Be Eating for a Healthy Gut

Fasting With a Cold – Viral Infections

In general, fasting doesn’t look like a great idea if you’re dealing with a viral infection like the flu or common cold. Why?

Studies on Fasting and Viruses

Animal studies show that mice who fast have a worse response to subsequent viral infections. In one paper, mice were either fasted every other day or placed a normal diet, then exposed to a “viral mimetic” (a type of chemical that replicates a viral infection). The mice who fasted ended up with higher cortisol, a more inflammatory immune response, more severe symptoms, and acted sicker than the mice who ate.1

Another mouse study found that in animals exposed to an infectious virus, a fat-based (fasting) metabolism was detrimental to survival and a glucose-based (fed) metabolism was beneficial.2

Viruses are much smaller than bacteria and generally cause trouble by hijacking cells and using your body’s machinery to replicate. To do so, they often steal nutrients from the host. One example is selenium, a crucial nutrient for viral replication. Studies show that viral infections can induce selenium deficiencies and that correcting those deficiencies by, well, eating selenium-rich foods can improve the outcome of infections.3

Most viruses will deplete nutrients and you need to eat to replenish them.

Fasting Inhibits MTOR, Which is Good and Bad

Blocking MTOR (mammalian target of rapamycin) through fasting reduces expression of another major immune component: the interferon-inducible transmembrane protein (IFITM). 4 Think of the IFITM as a barrier preventing some viruses from gaining a foothold in your body, including influenza, Ebola, SARS, MERS, Marburg, Dengue, and hepatitis C. These are IFITM-sensitive viruses, but there are also IFITM-resistant viruses, like the common cold.

In studies of older adults, higher levels of mTOR predict lower rates of seroconversion, and giving them an mTOR inhibitor improves seroconversion after a flu vaccine. If fasting reduces mTOR (and it does), it should in theory improve the antibody response to a vaccine or infection.

Weird, right? Fasting reduces mTOR, which could impair your short term response to an infectious insult (or improve it if it’s the common cold) while improving your long term response. You might still get sick but at least your chances of developing longterm immunity should increase.

Fasting With a Cold – Bacterial Infections

In general, fasting looks like a better idea when you’re sick with a bacterial infection.

Research on Fasting and Bacteria

One indicator is that your appetite often falls off a cliff when you have a bacterial infection. The last you want to do when you’re dealing a bout of food poisoning is eat. This doesn’t usually happen with viral infections, and I believe that’s important. In those “base” states of survival, what you crave is a good indicator of what you need.

A key component of the innate immune system’s ability to deal with bacterial infections is phagocytosis: When a class of immune cells called neutrophils surrounds, engulfs, and destroys individual bacteria. The phagocytic index describes the number of bacterial cells a neutrophil is able to engulf and nullify in a set time. Generally speaking, higher phagocytic activity means you have a better response to bacterial infections.

Luckily, we know pretty well how to increase and decrease phagocytic activity in people. To decrease phagocytic activity (make neutrophils worse at engulfing and destroying pathogenic bacterial cells), you simply feed a person sugar.7 It could be orange juice, honey, sucrose, fructose, or glucose—any simple source of sugars—and if you give 100 grams to a person, their phagocytic capacity drops for at least five hours. Give the person nothing—let them fast—and their phagocytic capacity climbs. Even at 5 hours after eating the sugar, the phagocytosis still hasn’t caught up to that of the fasting person.

Phagocytosis doesn’t work so well against viral infections because a virus sequesters itself in the host’s cells. Neutrophils can’t engulf and kill the host cells; that’d just be counterproductive and probably quite dangerous. However, there’s evidence both ways: that neutrophils can enhance the immune response to viral infections but they can also exacerbate the damage done to host tissues. It isn’t clear what role they play so I’d advise against consciously manipulating them through fasting.

Intermittent Fasting While Sick: Making Sense of it All

There are no easy, straightforward rules governing the optimal fasting strategy for infections, whether viral or bacterial. Each virus is different. Every bacteria is separate. Nothing in biology is simple. What we do know:

There are no magic bullets, but it cuts both ways. You are resilient. While most of the humans throughout history didn’t make it through hundreds of thousands of years of death, destruction, famine, and disease, your gene line did. So don’t think you have to pick one or the other—fasting or feeding—in response to illness. Go with what feels best, don’t get dogmatic, and just take it easy.

What’s your go-to feeding strategy for dealing with sickness? Do you differentiate between viral and bacterial illnesses? Let me know down below!

The post Fasting with a Cold: How Does Fasting Impact Viral and Bacterial Infections appeared first on Mark's Daily Apple.

Coping With Budget Stress During the Pandemic