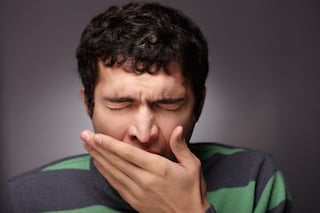 Sleep deprivation affects your brain, metabolism, immune system, and cardiovascular health, not to mention your day-to-day happiness and quality of life. Sleep should be one of our top health priorities. Yet all the research says the same thing: we are chronically sleep deprived as a society.

The CDC reports that one-third of American adults suffer from “short sleep duration,” meaning they consistently get less than seven hours per night.1 A 2020 Sleep in America poll conducted by the National Sleep Foundation found that only 16 percent of us feel well rested every day.2 And this isn’t just an American problem. According to a survey conducted by the Philips corporation in 13 countries in 2021, barely half of adults worldwide are satisfied with the sleep they’re getting.3

You have to wonder if some of these surveys underestimate the problem. After all, how many of us want to admit how often we stay up until 2 a.m. scrolling on our phones? More to the point, how many people know if they’re getting good sleep? Sleep deprivation isn’t just getting less than eight hours a night of sleep per night. You can also wind up in a sleep debt when your sleep quality is lacking and you aren’t getting the restorative rest you need.

Does the average person even know what it feels like to be fully rested? Perhaps not. It’s like when people start eating Primally, and they finally discover what it’s like to have energy throughout the day, or they realize that those chronic stomach aches and sore joints weren’t normal after all. By the same token, lots of people are probably suffering from symptoms of sleep deprivation but chalk them up to stress or illness. Or they simply ignore them.

Everyone knows how critical sleep is for health, but it’s just so darn easy to put good sleep on the back burner. Today we’ll highlight some signs of sleep deprivation that you might be missing.

The kind of sleep deprivation we’re talking about today is what researchers call chronic partial sleep deprivation or sleep restriction. You aren’t entirely sleep deprived, staying awake for 24, 36, or even 72 hours at a time like some folks with insomnia or research participants do. Rather, you consistently get less sleep than you need, racking up sleep debt incrementally night after night.

Sometimes, the factors leading to sleep deprivation are within your control—staying up late to consume media, having poor sleep hygiene habits—but not always. Caregivers or parents frequently experience sleep disruptions, and there’s little they can do about it. Sleep-wake disorders like sleep apnea by definition interfere with sleep, but so do many other medical conditions. (If medical issues are affecting your sleep, talk to your medical provider. They may have treatments you haven’t considered.)

Although the research suggests that some people are more resilient to sleep loss than others, everyone is negatively affected by insufficient sleep. You’re no doubt familiar with common side effects like

Sleep deprivation increases your pain sensitivity. One night of total sleep deprivation decreases your brain’s pain threshold,4 and even normal day-to-day fluctuations in sleep quality can affect how much pain you experience. Researchers used sleep trackers to track two nights of sleep among 236 people who were already experiencing some pain. When sleep quality declined from one day to the next, participants reported more pain the second day.5

Sleep deprivation can make your symptoms worse if you have a condition like fibromyalgia, rheumatoid arthritis, or other chronic pain.6 This is a double-edged sword because it’s harder to get good sleep when you’re hurting. Experts suggest treating chronic pain conditions and sleep disorders simultaneously because they are so intertwined.

One specific way sleep deprivation hurts is by causing headaches. Losing just an hour or two of sleep a few nights in a row can trigger all-day headaches. Folks who already suffer from chronic tension headaches or migraines are particularly at risk.7 This, too, is a bidirectional effect: poor sleep causes worse headaches, and headaches interfere with sleep. Insomnia is significantly more prevalent among people with chronic headaches and migraines compared to the rest of the population.

Sleep deprivation shows in our faces, and we judge well-rested individuals to be more attractive. For example, researchers photographed 20 adults with sleep apnea before and after treatment. Raters judged their post-treatment photos, when they were getting better sleep, to be more attractive and more youthful.9 The same is true for how we see ourselves. A study of 60 women found that chronically good sleepers are more confident in their appearance than poor sleepers.10

Bad Sleep Leads to Environmental Disasters (and Other Accidents)

Sleep deprivation leads to human error. Tired workers have been at least partially responsible for an alarming number of near-calamities at nuclear power facilities, including Three Mile Island in 1979. Investigators also ruled that sleep deprivation was a contributing factor in the Chernobyl disaster in 1986, the Challenger explosion, the Exxon Valdez oil spill, plus who knows how many near-misses.14

Sleepiness is a leading cause of other less catastrophic—but still plenty serious—accidents. Even a single night of missed sleep leads to measurable defects in reaction time, attention, working memory, and the ability to multitask.15 The National Highway Traffic Safety Administration states that sleepiness was a factor in at least 91,000 automobile crashes in 2017, and that’s just in the U.S.16

In surveys, 4 percent of drivers admit to having fallen asleep at the wheel in the past month, and a whopping 40 percent in their lifetime.17 18 Patients and medical professionals alike have been sounding the alarm about this problem for years, but medical students, residents, and many doctors still must work long hours with little time for sleep.

The scary part is that you probably don’t even realize how much your cognitive function is affected. Even mild sleep deprivation—sleeping six hours per night instead of the recommended eight—leads to significant impairment. Yet sleep-deprived individuals routinely report feeling normal. The truth is, you’re probably making lots of little mistakes at work, at home, in the gym that go unnoticed… at least by you. Your coworkers may tell a different story.

You know that sleepiness makes you grouchy and not all that pleasant to be around, but that’s only one of the ways sleep deprivation can lead to conflict in your relationships.

Generally speaking, when you sleep better, you have better relationships (and more of them) in all areas of your life. Lots of studies link sleep quality—getting good sleep and plenty of it—to relationship satisfaction among romantic couples, in particular.19 Sleep deprivation can easily lead to misunderstandings. Sleepy people are more likely to misinterpret one another’s emotions.20 Plus, according to psychologists, you’re less able to put yourself in your partner’s shoes and see their side of things.21 This makes it harder to resolve those disagreements.

Even one night of lost sleep seems to predispose your brain to be on higher alert for threats and negativity.22 23 If your partner has even accused you of being “oversensitive” when you’re tired, this may be why. You literally are more sensitive on to signs of trouble a neurological level .

Chances are, you work to make your relationships successful. Shouldn’t that work include investing in high-quality sleep?

In one series of studies, researchers used a validated false memory paradigm. Participants memorize lists of words that have something in common, and later they need to recall the words. The true test is whether they remember seeing the common word which was actually not on the list. For example, the list might include butter, food, eat, sandwich, and rye. The question is whether participants falsely recall seeing the word bread. As you might expect, sleep-deprived participants incorrectly remembered seeing those words more often.24

In another study, researchers had participants view photographs of a crime in progress (e.g., a man stealing a woman’s wallet). Then they read a written description of the event that differed in a few key details from what they had seen in the photos. A week later, they were asked to recall features of the crime. Participants who had reported sleeping less than five hours the night before coming into the lab were more likely to remember false details.25

Obviously, these are pretty low stakes. However, misremembering can have more serious consequences, from fighting with your spouse because you have different recollections of that conversation from a few days ago to inaccurate eyewitness testimony.

More generally, sleep deprivation can affect how you see the world. For instance, people who sleep less are more susceptible to repetitive negative thinking, where they get stuck focusing on problems and negative experiences. Repetitive negative thoughts are associated with depression, anxiety, OCD, and poorer overall wellbeing.26

In extreme circumstances, sleep deprivation causes paranoia and even full-blown hallucinations. A 2018 review concluded that being awake for more than 24 hours can lead to blurred vision, visual distortions like problems with depth perception, and altered sense of time. The longer you go without sleep, the worse these distortions become. After two or three days without sleep, you’re likely to experience visual and auditory hallucinations.27

How to Improve Your Sleep

Hopefully you don’t need any more convincing that good sleep is worth the effort. For tips about how to improve your sleep quality and quantity, start with these posts from Mark’s Daily Apple:

17 Ways to Improve Your Sleep
7 Ways You Might Be Inadvertently Sabotaging a Good Night’s Sleep
Ask a Health Coach: Why Can’t I Sleep?
10 Natural Sleep Aids: What Works and Why

How To Set Workout Goals