AMRAP: As many reps as possible; usually done in a set amount of time before fully resting

BMR: Basal metabolic rate: the amount of energy (calories) used by the body at rest; doesn’t take into consideration activity or workouts

Bulking: Eating and training in a way that promotes muscle growth 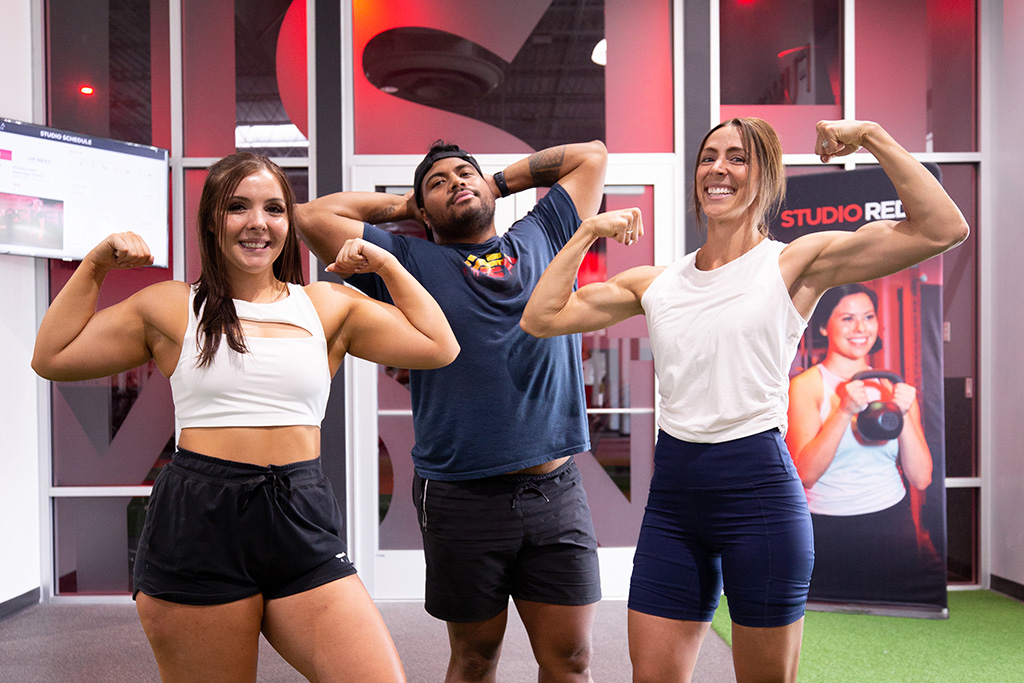 Cardio: Any sustained cyclical activity that elevates the heart rate for at least 10 minutes including walking, jogging, running, the elliptical, and stairs

Circuit: Completing three or more exercises in a row before repeating any of them

Compound Exercise: Exercises that use more than one joint and multiple muscle groups

Core: The torso excluding the arms, legs and head

DOMS: Delayed onset muscle soreness; caused by tiny tears in the muscle after a hard workout that can be alleviated with lighter movement through full ranges of motion

Free Weights: Weights held in the hands or placed on the body that do not have any fixed attachments such as kettlebells, dumbbells, and barbells

Functional Training: A style of training that helps a person’s day-to-day activities, like carrying groceries, picking up kids, or taking a jump shot

Group Fitness: Large group workouts with a single instructor teaching from the front of the room with movements usually choreographed to music

Invisible Lat Syndrome: Walking around with the arms slightly pulled off the body and a proud chest as if the lats (muscles under the arms) were extremely large

Isolation Exercise: Exercises that use one joint and a single muscle group

“PR or ER”: A phrase yelled by gym bros attempting to a lift a weight that will be a personal record (PR); if the rep is failed, they jokingly say they will end up in the emergency room

Pump: The feeling after completing a hard set in which a lot of blood has accumulated in the worked muscle Rep: A full action of lowering and raising a weight; multiple reps equal a set

Selectorized Machines: Machines that use a pin to select the amount of weight that will be used

Set: Multiple reps of a movement that equal 1 unit of work (example: 10 reps of a bicep curl could equal one set)

Shredded/Ripped: Low body fat percentage so muscles are extremely visible; however, not usually a good indicator of overall health

Swole: The feeling after completing a hard set in which a lot of blood has accumulated in the worked muscle

TRX: Total-body resistance training; usually refers to the suspension trainer with two straps and allows the user to manipulate their bodyweight to complete a wide variety of exercises

Warm Up: A series of movements and exercises that prepare the body to work out

Weightlifting: The Olympic sport that includes the two lifts, clean & jerk, and the snatch COVID-19 rate among dentists less than 1%