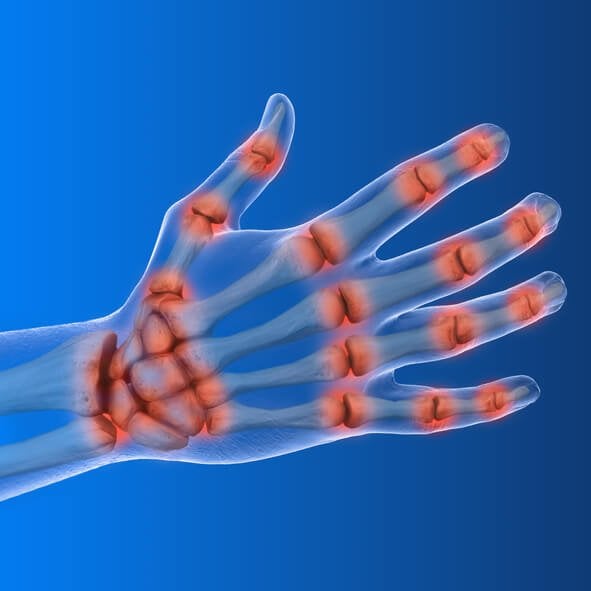 Perhaps you’ve grown as weary as I have of repeated arthritis ads. They appear in frequent rotation on television, online, and in magazines, promoting Enbrel, Humira, Otezla, Xeljanz, and others.

If you’ve actually read or listened to these ads, you might have felt perplexed at certain points. Here’s a quick rundown on what they’re saying — and not saying — in one of those ads.

Article Summary show
“The clock is ticking”
What did the ad get right?
Now, about the rest of the ad
What’s left unsaid?
The bottom line

“The clock is ticking”

Part 1: A teakettle whistles on the stove and a disembodied voice speaks as this ad for Humira opens. “This is your wakeup call. If you have moderate to severe rheumatoid arthritis, month after month the clock is ticking on irreversible joint damage. Ongoing pain and stiffness are signs of joint erosion.” Three people are shown starting their day in pain: one rubs his knee and grimaces, another has a sore shoulder, and the third, sore hands. Their suffering is clear, and you hear ticking in the background as a digital clock clicks forward one minute.

Part 2: “Humira can help stop the clock.” A garage door opens and out comes the man with the achy knee, now smiling and comfortably walking out into the sunshine as the music swells. “Prescribed for 15 years, Humira targets and blocks a source of inflammation that contributes to joint pain and irreversible damage.”

Part 3: The long list of side effects is voiced while happy scenes and beautiful music distract you: an adorable dog hikes with its once-achy-kneed owner; a young mother drops off her kids with a beaming grandma who previously was wringing her sore hands. “Humira can lower your ability to fight infection. Serious and fatal infections including tuberculosis and cancers, including lymphoma, have happened, as have blood, liver, and nervous system problems, serious allergic reactions, and new or worsening heart failure. Tell your doctor if you’ve been to areas where certain fungal infections are common, and if you’ve had tuberculosis, hepatitis B, are prone to infections, or have flulike symptoms or sores. Don’t start Humira if you have an infection.”

Part 4: The big finish is short and to the point: “Help stop the clock on irreversible joint damage. Talk to your rheumatologist.”

What did the ad get right?

Now, about the rest of the ad

The ad never mentions some important information about adalimumab:

As drug ads go, those for arthritis in general and adalimumab in particular are not the worst I’ve seen. But they can be misleading, perplexing, and incomplete. Of course, the main purpose of these ads is to sell drugs, not to provide a complete and balanced review of treatment options for RA. You’ll need to ask your doctor for that.