Have a Cold? How to Feel Better Quickly 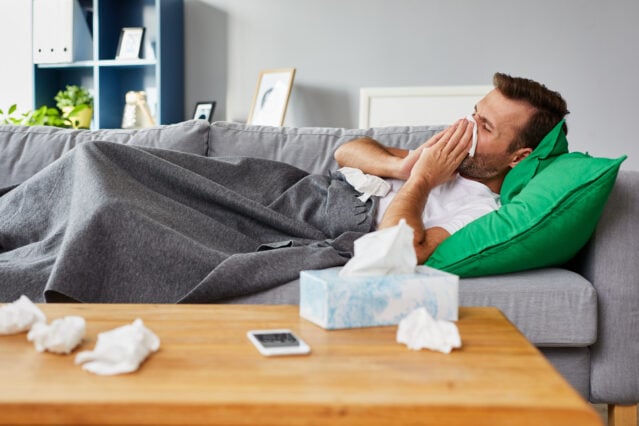 No one likes a cold, and various colds of one origin or another are going around this winter season. One of the worst parts of the common cold is that it’s unpleasant enough to make daily life annoying but mild enough to force you to still go out into the world and maintain a normal schedule.

But you don’t want to have to do that. You don’t want to get anyone else sick, and you want to feel better—fast. How do you do it? How can you speed up your clearance of a cold, whether through actually expelling the virus from your body, getting rid of the symptoms, or both?

Let’s talk about that.

How to Feel Better Quickly When You Have a Cold

These are the basic, research-backed things to do when you have a cold and want to get over it fast.

Almost every upper respiratory tract infection I’ve ever studied has selenium deficiency as an enhancing variable. Most viruses, for example, sequester selenium and utilize it to replicate and to weaken the host, leaving them wide open for further, deeper infection. The common cold is likely no different.

Eat Brazil nuts (one to three per day) and oysters and wild salmon. It is possible to overdo selenium, so don’t go overboard with supplementation. Just eat selenium-rich foods while you’re experiencing symptoms.

Zinc is the most important mineral for immune function, especially regarding upper respiratory tract infections. Depending on the virus, zinc has been shown to inhibit replication, lower binding, and block various physiological processes many viruses use to attack and ingratiate themselves with the host (you). And this isn’t just theoretical or based on cell culture studies. The best evidence we have shows that zinc supplementation reduces the duration of common colds in adults.1

Garlic is a potent super food lurking in plain sight. Garlic and its components can improve immune function, reduce the occurrence of common colds, and block viral entry into host cells.234 If I feel a cold coming on, I’ll crush and dice up an entire head of garlic and lightly simmer it in a big mug of bone broth. I find I am usually able to ward off whatever’s headed my way. Of course, that’s just an anecdote and the available evidence is more equivocal.5

Ayurveda is the traditional Indian system of medicine. Although talk of chakras and levitating gurus lets rational skeptics dismiss it entirely, modern science has vindicated many Ayurvedic therapies, herbs, and concepts. Golden milk is one, and it’s really simple. Add turmeric and black pepper (plus other spices) to milk and it turns gold. In Ayurveda, golden milk is used to fight sore throats, colds, and flus. Does it work?

Well, turmeric is absolutely rife with potent pharmacological effects. It may be able to relieve cough and clear up excess mucus, at least according to animal studies.67

Milk might actually be a bigger aid. Research has shown that a combo of two milk components—whey protein and lactoferrin—is able to reduce the incidence of the common cold in people.8 That was a concentrated supplement, however. Your standard glass of milk doesn’t have nearly as much whey or lactoferrin. Raw milk may be a better option, as it contains more lactoferrin than pasteurized milk, and raw whey provides more glutathione-boosting effects than heat-treated whey. To preserve these benefits, you’ll have to drink your golden milk unheated, of course. Here’s how I’d make it:

Fill a blender bottle with turmeric, black pepper, raw milk, and extra whey protein. Add a sweetener if you prefer. Shake vigorously. Drink. Maybe chase it with a lactoferrin or colostrum (the “first milk” that’s highest in lactoferrin) supplement.

In Sanskrit, “neti” means “nasal cleansing.” The neti pot is a exactly what it sounds like. You fill a tiny kettle with warm saline water, tilt your head over a sink, and pour the water into one nostril. It flows out the other one, clearing your nasal cavity and letting you breathe again. The scientific term is “nasal irrigation,” and it really does work against the worst part of a bad cold: the stuffy nose that keeps you up at night, gives you dry mouth, and makes food taste bland.9

Also, it’s better than antibiotics in kids with rhinosinusitis.10 It even improves symptoms in infants with bronchiolitis, another kind of viral infection.11

Gargling and Nasal Irrigation with 1% Povidone-Iodine

Make a 1% solution of povidone-iodine (1.5 tablespoons 10% povidone-iodine/betadine into 250 mL nasal irrigation bottle and fill the rest up with sterile/distilled water) and gargle with that at the first hint of a sore throat and spray it into your nasal passages. Betadine is intensely virucidal when applied topically. One study even found that COVID patients who gargled with 1% betadine had quicker clearance of the virus and its associated symptoms.12 Since the common cold is often a coronavirus, it’s also probably susceptible to betadine.

People call it “Jewish penicillin,” and they’re not lying: evidence has confirmed that chicken soup eases nasal congestion, improves the function of the nasal cilia protecting us from pathogen incursions, and reduces cold symptoms.

Does it have to be chicken? As most cultures include soup in their list of effective cold remedies, I suspect it’s the goodness of the broth that’s important and any true bone broth-based soup will work. Hell, in a pinch pure collagen peptides might even do the trick, though I’d opt for the real bone broth if you can.

Some people, when ill, swear that spicy food helps them “sweat it out.” Maybe, but a better bet lies in its effect on our nasal cavities. Capsaicin, the chili pepper component that produces a burning sensation in mammalian tissue, reduces nasal inflammation. When your nasal blood vessels are inflamed, the walls constrict; the space gets tighter and you have trouble breathing. Studies indicate that capsaicin is effective against most symptoms of nasal congestion.13

The foundation for my resistance and response to upper respiratory tract infections isn’t any specific food or supplement, of course. It’s everything. It’s my sleep, my stress, my training, my play. And yes, my food. As I said about my experience with COVID, I’d been training for it my entire life. But it does happen to the best of us, and it’s the worst. We shouldn’t accept being sick. I never do.

I’ve mentioned my common cold medicine: an entire head (yes, a head) of crushed garlic lightly simmered in a mug of bone broth spiked with cayenne, hot sauce, or fresh chilies. If I feel a cold coming on, I’ll drop whatever I’m doing and prepare it. This is a potent combination of three of the cold-busting ingredients with the most support in the literature (broth, garlic, and spicy food). Lately, I’ve been including black garlic, a delicious fermented variety that tastes like molasses and has increased pharmacological activity.

If I have a sore throat, heating up and drinking a blend of lemon juice (lime works too), water, and raw honey in a 4:4:1 ratio always makes me feel better. I tend to use a wild neem honey harvested in India. I’m not sure if the bees feeding on neem makes a difference, though the plant does possess antiviral and immunomodulatory effects. I’ve also heard great things about black seed honey, made from bees who feed on the black cumin seed flowers.

I also use these zinc acetate lozenges recommended by Chris Masterjohn. If you ever feel a sore throat coming on, suck on these and let them dissolve in your mouth. Each one takes about 30 minutes to dissolve, but it really does help.

How do you folks beat colds? What do you do?

Thanks for reading, everyone.

The post Have a Cold? How to Feel Better Quickly appeared first on Mark’s Daily Apple.

Probiotics — even inactive ones — may relieve IBS symptoms