History of cardiology : A soulful story of “Dr.Thomas”and his BT shunt

History is rarely kind to the original heroes in the scientific world.The classical Blalock-Taussig shunt,(BT shunt) the term we heard for the first time in the early clinical years of MBBS .We know, it as a dramatic surgery (Palliative though) connecting subclavian artery to the pulmonary artery for the commonest congenital cyanotic heart disease -Tetralogy of Fallot.

Now, half a century later, came to know, there is a gripping story of an oppressed black hero behind this famous cardiac surgery. This post is all about the fascinating life of Vivien Thomas, a humble carpenter’s son from Nashville. While he dreamed to become a doctor, circumstances and fate had some thing different to offer .He could join only as helper in the wards of John Hopkins, Baltimore . His extraordinary hand skills were recognised by then surgeon Alfred Blalock and made him as an assistant in the Hopkins animal lab.He was working on a project to resuscitate traumatic shock victims then. Dr Helen Taussig who was a pediatric cardiologist was wondering whether Dr Blalock could offer some surgical cure for the sick blue babies under her care.

When Dr Blalock was brainstorming the problem , it was Thomas ,who created dog models of hypoxic circulation and helped create the concept and methodology of diverting blood from subclavian artery to pulmonary artery .He single handedly operated on nearly 200 dogs. He literally taught the chief surgeon Blalock the delicate vascular suture tricks .

Come October 24th 1944 , the first blue baby was operated , with Blalock Insisting Thomas to stand beside. History was created -first heart surgery in USA. Which later on became the most famous concept that gave a fresh lease of life to thousands of children with TOF. 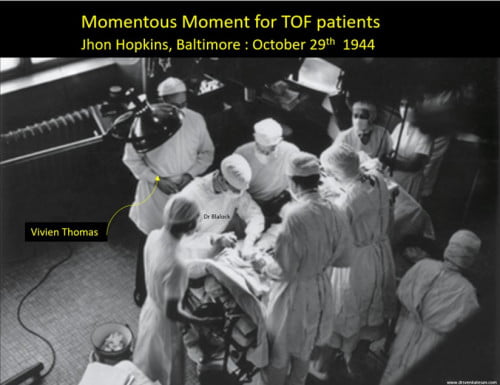 It’s painfully emotional to watch the Vivien Thomas standing right behind Dr Blalock and guiding his Boss anxiously , with his hands tied just because he is not a qualified doctor. The others in the team included Dr Denton Cooley and Helen Taussig.

No surprise, when this famous work was reported in the media, the entire cardiology community rejoiced as the news broke out over the globe .It was published in JAMA in 1945 (Blalock1945.pdf ) . Did you guess it , yes, the name Thomas was not to be found anywhere though. How can you expect it ? , after all , he is a black lab supervisor working with dogs ! Thomas’s , work was never recognized for the next 30 years until a grand occasion (Lord made?) that happened in the Baltimore in 1971. His dream of becoming doctor became a moment of truth. Baltimore school,of medicine finally recognised his work and conferred a honorary doctor . Unfortunately Dr Blalock was no more by then to attend to his famous pupil.
Its 2020 , 80 years after the monumental surgery , the BT shunt has since been renamed as Blalock, Thomas ,Taussig shunt . A new exclusive center for congenital heart surgery in Baltimore has come up in their name. What a great end to this black man’s journey in troubled racial times.

Thanks to Hollywood minds who thought this story deserved to be made as movie. “Something Lord made” directed by Joseph Sargent. It was a gripping scientific roller coaster .No surprise it got so many awards including three Emmys.

Every physician,especially the cardiologists should watch this movie. I can vouch, the one and a half hours time you are going to spend will be enriching both professionally and emotionally.

Lucky to find this movie free on you tube.