How Bad Are Peanuts, Really? 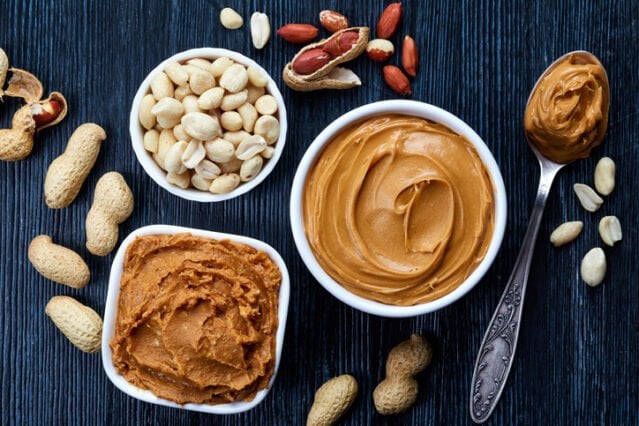 For years, the ancestral health community has shunned the humble peanut. I did so myself in fact. Why can’t I have peanuts? you may ask. Because they’re legumes, would be the standard answer. And that was that. The status of legumes was decided in the Primal and paleo world. Too many antinutrients, case closed.

In recent years, however, my stance on legumes has softened.

The lectins and phytic acid we worry about, it turns out, are mostly deactivated by heat and proper preparation. A bit of phytic acid can even be a good thing, provided you have the gut bacteria necessary to convert it into beneficial micronutrients. All in all, legumes turn out to be a relatively nutrient-dense source of resistant starch and other prebiotic fibers. If you can swing the carbs and you feel fine eating them, legumes are on the table.

Peanuts are the most popular legume. It’s not quite a staple source of calories in most people’s diets — many populations eat quite a few beans and lentils of various sorts — but nothing seems to capture hearts and minds like a large dollop of peanut butter. At least in this country, peanut butter has a cultural status that touches off nostalgia. And let’s be honest, too, peanuts and peanut butter also has a budgetary draw for many people. It’s generally cheaper than other nuts.

I thought I’d revisit the idea of peanut consumption in the context of a Primal way of eating. Does it fit? Does it hurt? What are we to make of the peanut?

If you’re still hesitant about the “legume thing,” go back and revisit the legume post I wrote a couple years ago. You should come away with a greater respect for the legume, and maybe more consideration for its inclusion in your diet.

Article Summary show
Nutrition in Peanuts
Peanuts and Your Gut
Recipes to try:
Aflatoxins in Peanuts
Peanut Agglutinin, a Lectin
Almonds vs. Peanuts
The Verdict, from a Primal Perspective
Choose Dry Roasted Peanuts

Here’s a basic rundown of the nutrition in peanuts:1

Protein – They also contains complete protein replete with all the essential amino acids, although I wouldn’t recommend that you rely on peanuts for your protein (it’s just a nice bonus).

Fat – The predominant fatty acid is monounsaturated, though there is a fair bit of polyunsaturated fat as well. All in all, the peanut is a standard example of a whole food. Not incredibly nutrient-dense, not nutrient-poor.

Peanuts and Your Gut

Peanuts do seem to have a curious (and beneficial) relationship with gut bacteria and gut health in general.

Consuming peanuts with probiotics seems to help those probiotics survive passage through the gut.2 A case for adding peanut butter to your kefir smoothie?

Peanut skins contain polyphenols which are not absorbed but interact with the gut to improve elevated blood lipids.4

As a ground nut — a “nut” that grows in the ground, rather than on trees — peanuts are exposed to a lot more soil-based fungus than many other foods which typically only see it during storage. One of the fungi they encounter produces a mycotoxin called aflatoxin. During storage, which tend to be in the warmer, more humid climates amenable to peanut production, aflatoxin levels rise even further.

Aflatoxin is metabolized by the liver. Large enough doses of aflatoxin are a liver carcinogen in high doses5 (it’s actually what T. Colin Campbell used to induce liver cancer in mice during his China Study crusade to indict animal protein). In China, a study of people from different villages in a region known for liver cancer found positive correlations between the amount of aflatoxin ingested and liver cancer mortality rates.6 Those villagers who ingested less aflatoxin from peanuts, peanut oil, and corn were less likely to develop liver cancer; those who ingested more were more likely. However, hepatitis B rates were also elevated in this population, and hepatitis B and aflatoxin synergistically increase the risk of liver cancer. If you don’t have hep B and don’t eat peanuts as a staple source of calories, the risk of aflatoxin drops.

If you’re worried about aflatoxins:

It’s resistant to heat, unlike most lectins. It survives digestion and ends up passing through into your bloodstream. And this has been tested in live humans, not just animals or isolated cells.

In isolated colon cancer lines, peanut agglutinin stimulates the growth of tumors.11 Peanut agglutinin may also mimics the action of a known promoter of cancer metastasis (spreading to other tissues).12 Metastasis is what kills most cancer patients.

In both cases, peanut agglutinin looks problematic in the context of existing cancer. It does not appear to promote the development of cancer.

Peanut agglutinin (via peanut oil) has also been shown to promote atherosclerosis in animal models.13

A lot of people will opt for almonds over peanuts after comparing the nutrition content in each. Gram for gram, almonds have fewer calories, more fiber, fewer carbs, and less concern for aflatoxin because they grow on trees.

The Verdict, from a Primal Perspective

Looking at the broader picture, peanut consumption correlates with good health. Evidence shows that the people who eat the most peanuts could have a lower risk of various cancers, including colorectal cancer,14esophageal cancer (in a high-risk area of China, no less),15 and pancreatic cancer in men,16 as well as potentially lower all-cause mortality and mortality from heart disease.17 This isn’t proof that they’re good for us, of course, or “anti-cancer,” but it is a strike against the idea that peanut agglutinin is a wholly toxic cancer-and-heart-disease promoter. If the effect was that powerful, it would probably show up in population studies.

It’s fun to get in the weeds on these topics. Just beware of basing your opinions or diets on the effect of food components in isolated cancer cells under specific contexts. Read, don’t commit. Integrate with broader population studies to get a better picture of what’s going on.

The totality of evidence suggests that peanuts are fine for most people to consume in moderation.

Salty peanut butter smeared over a banana? A fantastic post-drinking snack for replenishing lost sodium and potassium. Knock the carbs down by eating a green banana.

Spoonful of peanut butter right out of the jar? Just don’t let it turn into five spoonfuls.

But the absolute best way I’ve found to consume peanuts is to blend them with tigernut flour, sea salt, and a touch of honey using a food processor, roll the mixture into balls, and pop them in the freezer.

When going for actual peanuts, get dry roasted peanuts. Whenever you see a nut that’s been “roasted” in oil, that’s basically a deep-fried nut. Couple that with the fact that most roasting oils are fragile seed oils high in omega-6 and you’ve got an unhealthy snack on your hands. Dry roasting solves this. The texture of a dry-roasted peanut is even better. I don’t want that crispy glazed exterior of a fried nut. I want my nuts toasty.

That’s it for today, folks. Be sure to share your comments, questions, and concerns about peanut consumption down below. Thanks for reading!

The post How Bad Are Peanuts, Really? appeared first on Mark’s Daily Apple.

Living In Possibility Not Circumstance with Lee Richter

How Are The Mind & The Brain Different? A Neuroscientist Explains