How to Clean Out Your Kitchen and Go Primal 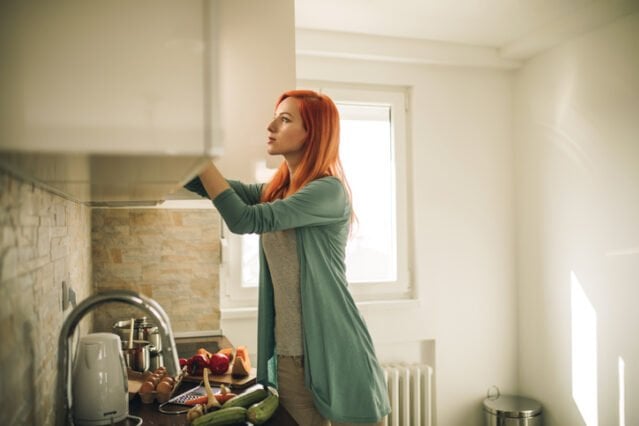 Most people find their way to the Primal Blueprint via food. They’re looking to start eating “right” and get healthy. Maybe they ask a few friends whose lifestyles they admire, or they Google a few buzzwords—low-carb, paleo, keto—and eventually make their way here. However they get here, I love the unbridled enthusiasm of someone on the precipice of change. They’re ready to listen and do whatever you advise. Just say the word. And when they ask where to begin, the word I say is: purge.

If you intend to start eating differently, you have set up your environment for success. This is habit change 101.

Want to stop eating so much sugar? Toss all the candy, ice cream, and whoopie pies, and stock up on protein-rich snacks and 85 percent dark chocolate instead.

Need to kick that soda habit? Say sayonara to the soda, buy some sparkling water, and stop taking the elevator at work that drops you off by the vending machines.

During our 21-day Primal Resets or Keto Month challenges, one of the very first things we ask participants to do is a pantry purge for this very reason. On the surface, it’s pretty simple: get rid of the big three, plus any products made with them. Except it’s not that simple. Nothing ever is. We always get a lot of questions about how, exactly, to undertake the pantry purge. Hence today’s post. I’m not going to cover what to purge when you clean out your pantry. This older post covers that in great detail. Today is about strategy and how to navigate the sometimes thorny complexities here.

Article Summary show
First, Stop Buying Stuff You’ll Have to Throw Out Later
Go Big: The Ruthless Purge
“What if I can’t afford to replace all my food at once?”
“I feel guilty wasting so much food.”
“My partner/roommates/kids will be furious if I throw away their favorite food.”

First, Stop Buying Stuff You’ll Have to Throw Out Later

Let’s say you’re not quite ready to start eating Primally yet. You’re taking your time learning about the Primal Blueprint, or you’re waiting until January, your birthday, or after that vacation you have planned for next month. That’s fine. In the meantime, though, give your future self a leg up by buying fewer chips, frozen desserts, and cases of energy drinks starting now.

So often, people feel the need to go on a junk food bender (whatever that means to you) before “getting healthy.” That’s a self-sabotaging mentality that starts you off on the wrong foot. The implication is that you’re leaving the good life behind and jumping into something less desirable. I take exception to that. Primal eating isn’t boring, you shouldn’t feel deprived, and it’s certainly not a punishment. You don’t need to throw yourself whatever the food equivalent of a bachelor party is.

Resist the urge to go out on a bang, and save yourself some money by not filling your pantry with things you will have to purge when you’re ready to take the leap.

In the past, I’ve advocated what I call the “ruthless purge.” That’s where you go into your kitchen with the biggest garbage bag you can find and throw out anything with grains, excess sugar, or seed and vegetable oils. Check the fridge, freezer, pantry, cupboards, and drawers. Don’t forget the spice rack. Read every label, and if something is even a little suspect, get rid of it (recycling any recyclable packaging, of course). Start your Primal reset with a totally clean slate.

Now, I still think this is a great way to start, but I’ve occasionally gotten some pushback on this strategy that I think is valid. Let me address those concerns one at a time.

“What if I can’t afford to replace all my food at once?”

In this case, a more gradual purge is in order. I’d still suggest tossing the worst offenders if you can. To me, that means things like:

Especially for folks on a tight food budget, I’d never suggest tossing conventional eggs, meat, or produce. Yes, I personally choose grass-fed and organic when I can, but Primal is all about making the best possible choices given the options available to you. Conventional meat is always going to deliver many more benefits than marshmallow cereal.

As for the “borderline foods”—foods that aren’t strictly Primal but also aren’t the most un-Primal in the grand scheme of things—that depends on what you can afford. Maybe you eat through your existing supply of oatmeal, legumes, or rice but don’t buy more once they’re gone, at least for a while. If you suspect a particular food is triggering acute health problems, like your IBS flare-ups, for example, just get rid of it. It’s not worth it.

At the end of the day, I trust that you’re going to do the best you can. If that means eating up all the food you have in your kitchen, Primal-aligned or not, because you can’t afford to throw anything out, you won’t get any guff from me.

“I feel guilty wasting so much food.”

Food waste is a huge problem and something I try hard to be conscientious about in my own life and at Primal Kitchen. So what are you supposed to do if you don’t want to throw food in the trash, but you also don’t want to eat it? The obvious answers are to donate unopened items to your local food bank or shelter. Or, use those foods to make meals for others—think new parents, elderly neighbors, friends who are sick or are recovering from surgery—or for events like office parties where a baked pasta casserole or batch of cookies would be welcomed.

When I’ve suggested this in the past, though, some people have chimed in and argued that these approaches are problematic in their own right. Why, they ask, are those foods okay for other people if they’re not good enough for you? Doesn’t giving them to food pantries exacerbate the problem of lower-income folks having more access to hyper-processed, less nutritious food than they have to meat and produce? I see this point, but I also think the issue is far more complicated than that. Frankly, I see both sides and don’t have the definitive answer here. You’ll have to decide where you come down on this debate. (Feel free to hash it out in the comments). One compromise option might be to donate your toaster strudels and pasta along with canned fish, canned vegetables, and a monetary donation, which many food banks will use to buy perishable items.

You always have the option of doing the gradual purge described above. Ask yourself what feels like the lesser evil: eating foods you no longer want or throwing them away. It might be a hard choice. Remember this and use it as incentive to keep these items out of your kitchen in the future so you don’t have to go through this again.

“My partner/roommates/kids will be furious if I throw away their favorite food.”

“What if the people I live with aren’t on board with my new way of eating?” We get this question all the time during our Primal challenges*, and it’s a toughie.

First things first, don’t throw away their non-Primal favorites if they haven’t committed to going Primal with you. That will just breed conflict and resentment.

Still, it’s perfectly understandable if you want the cookies, potato chips, and soda out of sight and out of mind. Communication is vital here. Explain why you’re making the changes you’re making and what your housemates can do to support you. I’ve found the best strategy is to create kitchen zones. Let them have their foods, but keep them separate from yours, ideally in a specific cupboard that you don’t open.

You can’t force other people to go along with your Primal diet, no matter how much you want them to. Lead by example, and hopefully they’ll start to come around in time. In the meantime, keep your eyes on your own plate. (And no, it’s not easy. My colleague Erin Power has some more great tips for dealing with unsupportive partners.)

*Speaking of Primal challenges, watch this space for forthcoming announcements about our January plans!

That’s it from me. I’d love to hear about your experiences going Primal. When it came to diet, did you jump in with both feet or make gradual changes? Would you do it differently if you had to do it over?

The post How to Clean Out Your Kitchen and Go Primal appeared first on Mark’s Daily Apple.

Getting the Indoor Cycle Ready to Ride (Adjustments)