Impact of the Immune System on the Brain and Mental Health

Most are aware that neurons send neurotransmitter signals to each other in circuits within the brain. My new book, The Secret Language of Cells, shows that similar conversations occur among all the cells in the body and these wide ranging conversations determine all physiological functions. While there are numerous examples of this cellular communication in the book — such as capillary cells sending directional signals for white blood cells to find an infection and capillaries instructing stem cells how to produce particular cells for the brain, this article will focus on a few ways that cellular conversations among immune cells and brain cells affect mental health.

Two-way cellular conversations between traveling immune cells and stationary brain cells use signals that are sent as molecules, or molecules inside sacs, that are secreted into tissues, blood vessels, and cerebrospinal fluid. The signals can profoundly affect general cognition and memory, and are highly related to depression and pain, as well as responses to stress.

For many of the major influences on the brain, signals are sent by T cells that travel in the cerebrospinal fluid (CSF). These T cell signals are relayed to specific regions of the brain by special lining cells of the chamber that holds the CSF. T cell signals sent in the CSF to brain cells can have an impact on many aspects of cognition and behavior. For example, when we are ill with a fever, T cells send signals for the brain to create the “sick feeling” so we will slow down and take care of ourselves. When the infection is over, T cells send a different type of signal, using pulses of secreted molecules, that tells the brain to restart and maintain normal cognition.

In adults, a small number of new neurons are regularly produced in the memory center of the hippocampus. These new neurons are vital for producing new memories. Research has shown that depression correlates with a decreased production of these neurons, which can lead to the decrease in memory often seen in depression. But it was not clear how this happened. It is now known that signals from T cells can alter the production of new brain cells and therefore increase or decrease memory ability. During depression, T cells signal for fewer new brain cells to be made, which leads to reduced memory. These signals also affect the generalized inflammation throughout the body that often occurs with depression. When the depression is treated by medications, ECT, psychotherapy, etc., the immune signals begin to again stimulate the increased production of new neurons, better memory, and decreased inflammation. Better understanding these signals could lead to entirely new treatments for depression.

Stress is another situation that involves signaling between the immune system and the brain. While short term stress can be helpful by triggering increased learning and a rise in the production of neurons in the memory centers, long term stress does the opposite and can produce damaging inflammation and decreased memory. Both brain cells and immune cells pick up perceptions of stress. In a mechanism similar to that of depression, T cells send signals during long term stress that produce inflammation and decrease the production of new neurons for memory.

As immune cells travel throughout the body, they have many opportunities to send signals back and forth with neurons and other supportive brain cells. For example, a T cell—the master immune regulator—can secrete molecular signals directly into tissue that then travel to nerves. When the signal is picked up by the neuron, it can be relayed throughout brain circuits, which can then affect various other organs. This leads to a mechanism whereby an acupuncture needle or electrical stimulus triggers a local T cell—for example, in the wrist tissue, nearby but not in a blood vessel or nerve. When triggered by the acupuncture stimuli, the T cell sends a signal into the tissue that travels to a neuron that is not far away, which then relays another signal through brain circuits causing the acupuncture effect in a distant area of the body. 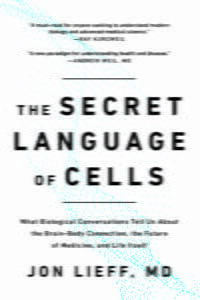 All of the effects on the brain and mental health described above occur because of elaborate back and forth communication between T cells and the brain. In my book, The Secret Language of Cells, there are detailed explanations of the wide range of conversations that various bodily cells engage in with brain cells. There is a discussion of the multiple types of signals that occur between neurons and the three types of supportive brain cells (astrocytes, microglia, and oligodendrocytes). Another research area described in the book is related to chronic pain. New findings show that chronic pain syndromes are correlated with very large, multi-faceted synapses and circuits, involving many more connections that ever seen before. Conversations in these complex multi-cell synapses and circuits involve a wide range of cells including neurons, the three supportive brain cells, immune cells, and even organ lining cells and microbes. Based on the discovery of these new types of synapses and signals, entirely new avenues for treatment will be developed for pain, depression, and damaging stress.

The post Impact of the Immune System on the Brain and Mental Health first appeared on World of Psychology.

EXCLUSIVE: BDA ‘toxic at the top’ and refuses an independent external investigation