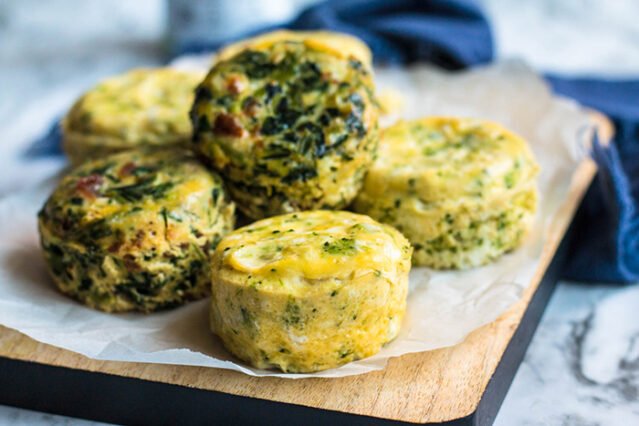 The low-carb community was pretty pumped when coffee shops first started to serve sous vide egg bites. Until then, most breakfast options came between a couple of slices of a bagel or croissant. Coming in around $5 for two little egg bites, it was only a matter of time before people started looking for make-at-home versions.

Do You Need a Sous Vide to Make Egg Bites?

Let’s first put it out there that food cooked sous vide is delicious. The temperature is so precisely controlled that there’s virtually no risk of overcooking or undercooking, and for the most part, it’s a hands-off cooking method. Still, it’s cost-prohibitive for a lot of kitchens – you’re looking at a couple hundred dollars for a decent system, which is more than the average household wants to spend on an appliance they’ll use only occasionally.

The solution? These adorable little egg bites are not actually made in a sous vide, but instead in an Instant Pot. The end result is a light and fluffy egg bite bursting with flavor. Ideally, these egg bites would be made in a silicone egg mold, but they also turn out well in ½ pint mason jars. If you don’t have an Instant Pot, there is an oven modification below.

This recipe makes 10 egg bites (5 egg bites of each flavor) which are great for an on-the-go breakfast or protein-packed snack. Feel free to experiment with your favorite add-ins.

Time in the kitchen: 25 minutes, including 18 minutes cook time Combine the eggs, milk and a pinch of salt and pepper. For a fluffier egg bite, swap out the milk for ¼ cup of cottage cheese. Blitz them together in a blender, and separate the beaten eggs evenly into two bowls. Liberally spray the insides of your mason jars with Primal Kitchen Avocado Oil spray. Each bowl of egg mixture will make 5 egg bites. Scoop out about ¼ cup of the feta broccoli egg batter into the jars, until the mixture is equally divided between 5. Do the same with the bacon, spinach, and egg mixture. If you are using an egg mold, fill the egg molds until they are a little more than ¾ of the way full. Cover the mouth of each mason jar with a small piece of foil. If you are using an egg mold, cover them with the accompanying lid (if oven safe) or with foil. Add 1.25 cups of water to the Instant Pot, and place the metal trivet into the pot. Nestle 5-7 mason jars into the Instant Pot on top of the trivet. Place the lid on the pot and select the “Pressure Cook” option. Set it for 10 minutes at Low Pressure. Once the cooking cycle is over, allow the pressure to naturally release for 6 minutes before moving the nozzle to the vent position. Carefully remove the lid and jars from the Instant Pot and allow them to rest for 1-2 minutes to cool slightly. Carefully run a knife around the egg bite and give the jar a gentle shake to release the egg bite from the jar. Add an additional ¼-½ cup of water to the bottom of the Instant Pot and repeat with the remaining jars. If you do not have an Instant Pot, you can fill the silicone egg molds and place them in a large baking dish or dutch oven filled with ?-½ full of water. Cover the mold with foil and bake the eggs at 325 degrees for at least 40 minutes, or until the eggs are firm (note that you cannot use mason jars in the oven).