Is there Intracellular edema in congestive heart failure ?

I am unable to answer this question confidently even after spending 25 years in the specialty of cardiology. I thought, the answer was yes. Reality is definitely different. Such is the complexity in the biology of the fluid and circulatory systems. The heart’s function doesn’t seem to end with just pumping 6 liters of blood every minute, ultimately, it has to handle a huge load of water as well with delicate coordination with the kidney. (ANP,& RASS feedback). It is fascinating to note, that the heart transforms into a powerful endocrine organ as and when it is necessary.

Read further, with a caution: (There is no specific physiological /molecular answer attempted)

About 28 of the 42 liters of fluid in the body are inside the 100 trillion cells and are collectively called the intracellular fluid. Thus, the intracellular fluid constitutes about 40 percent of the total body weight in an “average” person. Still, cells are somehow protected from the edema creating hemodynamic force until the very late stages. Fortunately, the Interstitium is the place all excess fluid stagnates. This is a great biological adoption. The simplest explanation is (Na /K+pump never sleeps  ) Bi-directional osmotic forces keep the cell dry even in adverse cellular milieu. Can’t imagine the implications, if every cell begins to swell in early heart failure. Still, it does happen to some degree I guess. We never quantified this.( Andrew Boyle,et al  Myocellular and Interstitial Edema and Circulating Volume Expansion as a Cause of Morbidity and Mortality in Heart Failure) 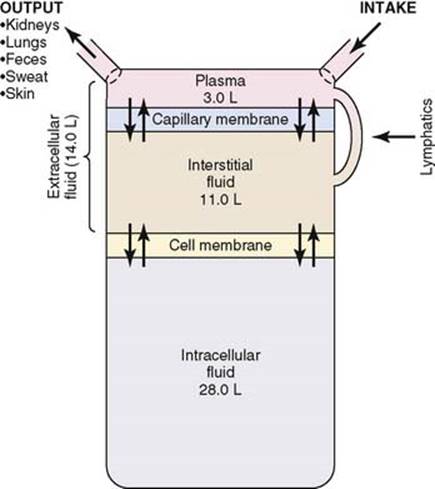 What happens to massive Intra cellular compartment size in HF? If renal perfusion is compromised (As one would expect in any significant heart failure) How does it affect this fluid distribution over that of heart failure? If the lymphatics’ final destination is the right heart how does this interfere with interstitial space clearance?

Though local factors operate, edema* in heart failure is a reflection of a more serious systemic plumbing issue. Even, subclinical fluid collection can interfere with cell function and contribute to unexplained fatigue which is an early sign of heart failure. No doubt, NYHA  gave much importance to this non-specific symptom in heart failure. Further, Individual organ functions may react in a different fashion with respect to water logging.Hepatic, portal splanchnic congestion directly affect GI function and intermediate energy metabolism.

.(*HF with zero edema so-called dry CHF  is a bigger mystery, is discussed elsewhere on this site)

Though the heart is a mechanistic pump when it fails it soon becomes a neuro-metabolic-endocrine problem. We are not clear whether heart failure retains sodium and water equally?  In renal failure-free water, accumulation is less than sodium. What happens in cardio-renal syndrome. These have practical implications as both hyponatremia and hypernatremia can be a feature with water content modulating it.(Now the term dysnatermia is more often used)

If RASS is activated net gain in sodium is expected. It doesn’t really happen. (Even with secondary hyperaldosteronism  sodium knows how to escape from the kidney). Vasopressin antagonist was considered a new innovation for hyponatremia associated with HF. To know the current role of V2 receptor antagonists Tolvapan, read here.

We do have powerful diuretics. It can unload the heart rapidly but can be harmful due to intracellular dehydration and electrolyte imbalance. When I asked an experienced Nephrology colleague  “Does excessive diuretics deplete ICF or ECF space? and how to quantify? , he was honest enough to accept, that it is primarily guesswork in a given patient and clinical assessment is supreme.

How to catch Heart failure early before clinical edema ? NT pro-BNP is a good option (>400pg/l) but physiologists armed with new generation imaging are working on how and where the fluid is accumulating in early heart failure. Nailfold video capillaroscopy (NVC) and confocal laser scanning microscopy (CLSM).  Wish, these modalities are really useful and do not end up as fancy tools and hike up the heart failure treatment costs.

Yakimov BP, . Pericapillary Edema Assessment by Means of the Nailfold Capillaroscopy and Laser Scanning Microscopy. Diagnostics (Basel). 2020 Dec 18;10(12):1107. doi: 10.3390/diagnostics10121107. PMID: 33353241; PMCID: PMC7766602.
Future of Cardiac Hydraulics management.
1. Afterload reduction, 2. Preload optimization, and 3.Inotropics. We have been playing with these three famous principles in heart failure treatment for quite some time. We must admit, nothing really worked to our expectations. “Total body water management” is a new hope. It will revolve around a mechanical fluid management system as this overview from circulation tantalizingly discuss. DRI2P2S  (Circulation heart failure 2020)

Edema in HF is primarily extracellular and interstitial until the end stage. Fortunately, the ionic and osmotic forces along with capillary hemodynamic forces keep the excess fluid within a safer interstitial compartment. However, we must realize each organ swells in a different manner depending upon cell membrane responsiveness to neural and humoral factors. The mechanism and content of edema fluids are different in heart vs kidney failure. It is also true, that every cardiac failure patient has a renal component and vice versa.

That’s it. I know it was a superficial attempt to understand water distribution in HF. Someone needs to break the complete truth about H2O metabolism in cardiac failure.

Should we really bother to know where does fluid accumulate in HF ?  In a pragmatic sense the answer is “No” Let it accumulate anywhere, just push inj. Lasix, or if refractory add Metolazone and Torsemide, (I need to rush to the cath lab for the next angioplasty for that angina-free RCA stenosis, you know !)

This 37-page landmark review about fluid dynamics will help you find many queries raised here. (Tough read though)

It Takes Two: How Couples Maintain Love and Intimacy When One of ...