Syncope is one of the common, yet difficult symptoms to evaluate especially in the elderly. Post-prandial syncope is one condition likely to be missed out.As the name suggests It has a distinct relationship with food intake. Mild fall in postprandial BP is an expected response but if it exceeds a  limit* syncope is triggered. (*Highly variable) 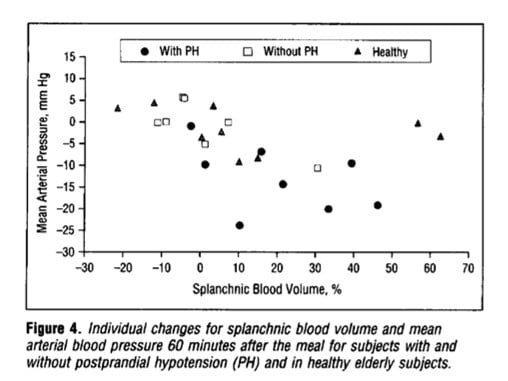 When does it occur?

It can manifest as early as 15 minutes, up to 2 hrs. The fall in systolic  BP is around 20mmhg. More common with large, hot meals. The fact that it can occur up to 2 hrs post meals, there is a likelyhood we might overlook it in history.

There is no specific therapy. Some of the following might be effective.

Postprandial hypotension/syncope is a less recognized entity. As always, history is the most important diagnostic tool in the evaluation of syncope, which comes free of cost as well. The diagnostic yield is much greater than sophisticated Holter and event monitors.

Please note, there is a much more prevalent, lesser version of this condition, ie postprandial dizziness or giddiness. However, as already stated there is a significant overlap between orthostatic hypotension and postprandial syncope. It’s worth ruling out diabetes and autonomic dysfunction, (even subclinical Parkinsons) in elders with such symptoms.

Here is a  comprehensive and elegant study (I think, It is only one of that kind on this topic )

Just In: Research Finds You May Be Able To Reverse Gray Hair