Home›Heart Disease›Stable CAD strategies : Why a 90 % LAD lesion needs much attention … while a 100% doesn’t ?
Heart Disease

Practice of cardiology is simple as long we don’t dwell deep into coronary physiology.

One of my patients asked, why he was told his total occlusion in LAD appears safer now, which was subtotal a few months ago.I told him, it is indeed true. It is the fear of subtotal disease that’s prone to a fresh coronary event. In total occlusion, chances of that happening are less or nil.

No, it’s not always true. He was surprised (Got him in the wrong foot ) when I said it is not 100 %, even 90% lesion can be safe if it’s not causing significant angina and responding to OMT. Of course, It is the morphology and stability of the lesion that will dictate* the outcome in the subtotal occlusion. If the lesion is stable, FFR is good >.8 (TMT is poor man’s FFR equivalent )  you can leave it as it is. Doing OCT /Virtual histology /NIR spectroscopy to define the vulnerability of plaque is neither practical nor desirable (Extreme academics is injurious to health)

So it is not the degree of the block that’s going to matter, but the effects of that block on distal circulation that will decide the rules of the myocardial revascularisation game. But unfortunately, both you, (the patients) we (the cardiologist) are finding it so difficult to come to terms with this basic truth in spite of multiple guidelines. 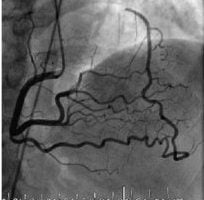 Meanwhile, CTO however makes it much easier to make a decision. One need not bother the content of CTO unless you plan an Intervention. I guess there is no FFR for CTO. Are we aware of any studies that have quantified antegrade flow across a 10% patent LAD and compare it with the Collateral flow in LAD in 100% CTO?

We have long glorified a concept of the open artery hypothesis. (Mainly in Post STEMI though) No one has dared to test and compare a hypothesis that a closed artery might still score over the open in at least some of the subsets of stable CAD. Such a study can never be ethically forbidden after all its a well-observed truth in the real world.

Dentist to take on charity swim across English Channel