Have you improved your health, tackled a fitness goal, or overcome obstacles with the help of the Primal Blueprint? Share your story with the MDA community by contacting me here. Your story will inspire others! 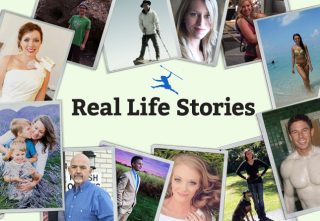 I signed up for the Marathon des Sables (MdS) about a year before the event was to take place in 2022. In terms of race experience at the time of signing up, I had run many marathons but only one 50km ultra race.

For those not familiar, the MdS is a self-sufficient race. There is a nightly Bivouac (to be shared among 8 people) provided by the organisation. Although water is supplied, it is keenly rationed. It is up to you to carry everything else you might need across the 6 stage, 7 day 145-mile course, up and down any Jebels and dunes.

Apart from the required physical ability to complete the race, it then becomes about the planning, training, testing and evaluating what works. Living in England, UK whilst training, there is a distinct difference from the expected race conditions and a lack of available options to replicate training scenarios without extensive international travel; but you focus on controlling the variables you can!

I came across the Primal Endurance audiobook by accident. I had to use up my membership credits to an audiobook subscription, and with a natural interest in endurance running, I chose this book. I was ignorant to the real basis of the book, assuming it was more technical form than taking things back to working on one’s internal aerobic engine. The analogy in the book is adapting your body to be a clean-burning electric engine versus one that burns fossil fuels and generates various nasties as unnecessary byproducts.

Early listening of the book had me fascinated, although slightly skeptical because I am a Vegan. Paleo and Vegan—tricky for sure, but thankfully I am a very basic eater. The more natural the food the better. There is a history of gluten intolerance in my family. Both my Grandfather and Father are coeliacs, so the wheat rejection part of the process really resonated with me and gave me the final push to avoid wheat where at all possible. (Thankfully I am not a coeliac and do not show any intolerance so the occasional accidental exposure is okay.)

The preceding five to six months prior to the Marathon des Sables I aligned more and more to the blueprint set out in the Primal Endurance book, even creating Maximum Sustained Power (MSP) workouts for the gym to condition myself, prior to hitting the sauna for a pass at heat acclimation. Preparing for a multi-day race event presents unique challenges and misalignments with the Primal Endurance methodology. I had to condition my body and mind for the fatigue of multi-day 20+ miles attempts, but I did my best to follow the spirit of the book. (Sorry Mark and Brad!)

A large part of the MdS is managing your nutrition, which is where the Primal Blueprint, I believe, delivered major benefits. If you want to compete over the challenging course, you do not want to be slamming down carbs throughout the race. In the heat and with the other physical demands placed on your body, your want your internal engine to concentrate on circulating oxygen and blood to your limbs to keep moving forward, not on your stomach and other digestive functions. My plan, following the blueprint, was for 100g carbs a day, no more. I would rely upon my aerobic engine to do most of the work. Where I needed to exert myself, I would use the 100g carb allowance to accommodate this.

There is a minimum calorie requirement all competitors must have, which is 2000 kcal a day. The event is over 7 days, so runners must carry a total of 14,000kcal on day one. We were allowed to drop by 2000 kcal a day so that on day two you are carrying 10,000 kcals. Being over 6 feet tall and weighing 180 pounds, this 2000 kcal a day would really be minimal. Runners can of course carry more food as they wish—at the cost of lugging it for a potential 145 miles! The strategy for food is simple: you want the lightest weight for the maximum calories. At first, I was considering tasty nut butters. However, I worried that in the heat of the Sahara Desert, this would result in unpalatable tubs of goo. What is peanut butter made from? Nuts. Nuts were to be the answer. You can get a variety of nuts to accommodate your individual nutrition needs: carbs, fat and proteins. I also took a multi-vitamin and some sports greens power to make up for the lack of fresh vegetables and fruit. The high fat content of the nuts streamlined into the Primal Blueprint and the adaption my body had been going through to become a fat-burning beast! The total weight of my food at the start of the event was under 6.5 pounds (17,300 kcals).

Although nutrition forms a large concern to all participants, and rightly so, often overlooked is the form of the runners themselves. Any excess weight (think middle-age spread) is an unnecessary burden on one’s efforts. The Primal Endurance protocol helped me trim off the remaining few pounds I estimated I could afford to lose by going keto and intermittent fasting without undermining my training schedule in the final weeks leading up to the race. I was at 18% body fat before getting on the plane to Morocco. The MSP ethos helped me retain power and strength whilst achieving my lean optimisation.

A final benefit I found by adopting all the above strategies is that the previous need to tape my creaking hips and knees disappeared! Some competitors might have needed the occasional—or frequent—anti-inflammatory or painkiller through their MdS attempt. (Some of the doses I heard runners mention could take out a small mule!) I thankfully found no need to consume any, which I am attributing to the benefits of not creating oxidative damage by the consumption of grains and other beige gloop.

Outstanding, Nic! Thanks for sharing your story with the Mark’s Daily Apple community!

We Have Free Will (But It Takes Willpower)