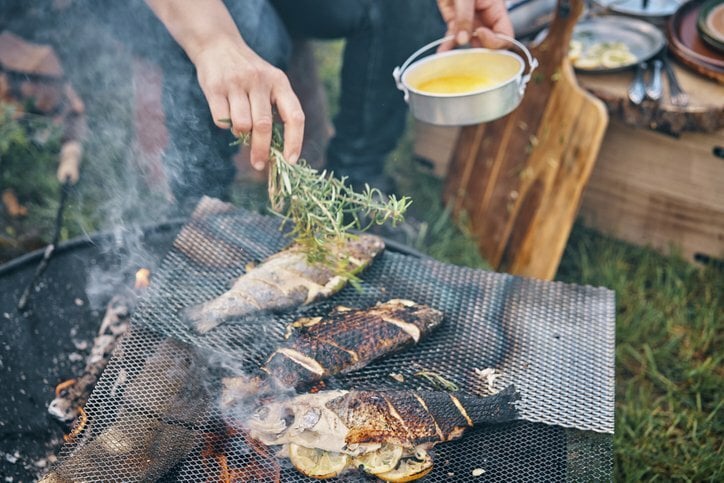 You’ve heard of the Mediterranean diet, no doubt. Perhaps your doctor has tried to turn you onto it. Maybe your parents or co-workers are using it to lose weight and normalize blood pressure. Read a popular treatise on the “Mediterranean Diet” and this is what it’ll have you eating:

It’s low-fat and low-protein, especially animal protein. It’s high-carb. It’s rich in grains and legumes, low in meat and dairy. And it’s based on the dietary patterns researchers observed after visiting post-WW2 Italy and Greece. These were real patterns, actual observations.

But is it really the traditional Mediterranean diet?

World War 2 was a rough one. Greece was occupied by the Axis powers throughout the war, its agricultural output totally commandeered. Italy was decimated. Both countries were recovering from massive changes to their traditional diet wrought by war. What Ancel Keys (the Med diet researcher in question and the same man who convinced the world saturated fat caused heart disease) observed was not the traditional diet of the Mediterranean. Rather, it was the diet of a beleaguered, suffering, diminished people just trying to get by. That’s the “Mediterranean diet” of the 1950s, but does it represent what Meds have been eating for thousands of years?

According to the evidence I was able to procure, no. It’s not a complete representation.

Before I begin, I’m not trying to suggest that the traditional Mediterranean diet was low-carb, high-fat, grain-free, and near carnivore. They’ve been eating and growing grains and legumes for thousands of years. That region has a long history of farming. But—the region also has a long history of ranching, fishing, cheesemaking, meat-curing, and aquaculture. There’s much more to the Mediterranean diet than pasta and salads.

What are the lines of evidence and what do they say?

By studying the stable isotopes present in bone collagen, researchers can determine what proportion of dietary protein came from animals and plants and whether they were terrestrial or marine. The more plant protein a person eats, the lower the nitrogen-15 isotope content of their bone collagen. The more animal protein a person eats, the higher the nitrogen-15 content of their bones. So when researchers take a chunk of bone from a grave site and analyze the nitrogen isotope percentage, they get a good idea about the source of its owner’s dietary protein.

Nitrogen-15 levels act as “trophic tracers”— they track the position of the animal on the local food chain, identify whether they’re carnivores, omnivores, or herbivores.

Your average herbivore has an N-15 level of 4-6. Deer, cows, sheep, rabbits, and other herbivores

Your average omnivore has one of 7-10. Bears, boars.

There’s some variation, of course, but that’s the basic set-up. Now, where did traditional Mediterranean diet-eaters land?

In an ancient site on Syracuse (Sicily), N-15 readings of bones taken from a graveyard ranged between 8.9 and 11.8, with the majority exceeding 10. A similar study on much older mesolithic hunter-gatherers living in Sicily had similar N-15 levels, with most in the 11-12 range.1 If you assume that the hunter-gatherers were eating a typical hunter-gatherer diet rich in meat, seafood and bereft of grains and legumes, it’s quite remarkable that they had similar N-15 levels as the later farmers who are supposed to be eating nearly vegetarian Mediterranean diets. They weren’t, of course: Both mesolithic foragers and ancient Med farmers were eating large amounts of animal protein.

Romans living in York, England in the 3rd and 4th centuries AD had elevated N-15 levels (from 10 to as high as 14) indicating a diet high in animal protein. Judging from textual evidence and bone middens from that period, they had access to beef, sheep, pork, oysters, chickens (likely eggs), and dairy.2

In Helike, a site in southern Greece, researchers uncovered fossil remains that were continuous from the 4th century BC to the 15th century AD.4 The N-15 levels ran between 8 and 10.5, again pointing toward strong omnivory with the bulk of the protein coming from animal foods—dairy and meat. The researchers try to “adjust” this by suggesting the animals and grains they were eating were abnormally high in N-15 and thus threw off the “true” N-15 values, but I think a more parsimonious explanation is that they were simply eating a lot of animal foods in addition to their bread and plants.

In a Greek outpost in ancient Bulgaria, researchers analyzed the N-15 levels of a a large sample of children ranging from infancy to 11 years of age, plus adult women.5 These were some major meat-eaters. Well, the infants were nursing and only eating animal food (breastmilk), so of course they had high N-15 levels. The kids’ N-15 levels dropped a bit as they aged, but remained high enough to indicate a large amount of dietary animal protein. The women’s N-15 levels were also elevated, reaching as high as 12.

Italian aristocrats during the Renaissance look like full-on carnivores based on their N-15 values, which approach those of the Pleistocene big-game hunters.6 The big difference is in the source of the protein. The Pleistocene hunter-gatherers ate very little marine food while the Italian aristocrats got between 15-40% of their animal protein from seafood.

From nitrogen isotope studies, we know that most Greeks and Romans across different regions and eras got the majority of their protein from animal sources. Now, this doesn’t preclude the consumption of plants. Someone with a high nitrogen isotope reading can still eat a good number of plants, just not protein-rich plants because the plant protein will have dropped their trophic level. That rules out legumes as the main source of protein int the Mediterranean diet—supposedly one of the most prominent parts.

Nor does it mean that they were only eating slabs of meat. Animal protein can mean eggs, meat, organs, fowl, fish, shellfish, and dairy. And yes, even some legumes can squeeze in there, they just can’t be the dominant force.

Another way we can gauge ancient diets is by looking at the sewers. Or rather, sewer, because there’s only one available for study. We lucked out with the city of Herculaneum, an Italian city that was buried under volcanic ash after the eruption of Mt. Vesuvius. The eruption preserved the contents of a sewer running beneath the city that the town’s inhabitants—from all walks of life—used to dispose of their kitchen waste. Over the past decade, researchers have sifted through it, taking representative samples of the sewer and analyzing them for food remains.7 What did they find?

Hundreds of different foods, many of which only appeared here and there. The staple foods, the ones that appeared consistently and frequently, included:

Except for some millet, they didn’t find evidence of any grains. This can be explained by the fact that the inhabitants consumed millet as porridge and other grains like wheat and barley as flour. Whole grains survive, flour doesn’t.

There were some legumes but they were infrequently found. This isn’t an indication of low legume consumption, as cooked legumes wouldn’t have survived anyway.

They found animal bones but for some reason didn’t analyze them. Maybe another time.

Another line of evidence can be found in animal bone burial sites.

Take the Roman legions. Popular legend has it that the Roman legionary only ate bread. That he conquered Gaul, Germany, and Britain eating a diet made up almost entirely of wheat and barley. They certainly did eat a lot of bread, but they also ate a lot of meat. Animal remains at historical Roman army camps show huge amounts of cattle and pig bones, while bone sites back in Italy reveal far more pig bones and a decent numer of cattle bones. 8 In fact, the large piles of cattle bones are a strong indicator to archaeologists that a Roman army passed through. They use the displacement of sheep and goat bones by cattle and pig bones as evidence of “Romanization” of a region.

We know from looking at hunter-gatherers and farmers that once agriculture is adopted, dental health falls off a cliff. Hunter-gatherers tend to have very good teeth; farmers have worse because they’re providing substrate for oral bacteria to consume. Even if they’re not eating sugar, they’re eating grains and other starchy foods that provide glucose.

And yet the ancient Romans have good dental health, at least compared to modern people. What’s going on?

My guess is that the lack of refined sugar is the reason why their teeth are in good condition.

They also had otherwise nutrient-dense diets—animal foods, particularly organ meats, dairy, and seafood (which the traditional Mediterranean diet definitely included) are rich sources of fat-soluble vitamins and minerals that are important for dental health.

The Romans and other traditional Mediterranean people definitely ate starch, but they ate enough animal foods to make up for it.

Put all this evidence together and you can “triangulate” a rough estimate of what the real Mediterranean diet consisted of:

Seafood, especially for those living on or near the coasts and rivers. And shellfish. Romans loved oysters. They loved them so much part of their motivation for conquering Britain was to get their hands on British oysters. Wealthier Romans would actually raise oysters at their estates and more modest Romans would even raise them in cities, suspending the oysters from ropes tied to bridges over bodies of water.

Some legumes. Hard to say exactly how much since their N-15 levels were so high.

Fish sauce (the Romans made a fermented fish sauce called garum that they put on almost everything).

All in all, it’s a very healthy way of eating. You could make it keto, high-protein, or higher-carb. You can ditch the bread and legumes, or try them out. It’s a good template to play with—just don’t fall for the “scraps of lean meat and non-fat dairy” nonsense.

Obviously there is no one Mediterranean diet. It’s a big place that includes not just Italy and Greece but also Turkey, Spain, Portugal, parts of France, Israel, Jordan, Morocco, and other parts of North Africa. The sea goes on and on and there are real differences between the different regions, but also commonalities.

I’m not Med, but it speaks to me. I was in Turkey last year and a lot of the street food was the same kind of thing you could get 300, 600, even 900 years ago strolling along those same Med streets. In Istanbul, you can buy mussels plucked right out of the water and cooked to perfection. Lamb liver grilled on skewers right there over coals. You can find fishermen grilling smelt right there on the banks of the Bosporus. You can buy sacks of roasted chestnuts. It was magical. It felt right.

What do you think?