Home›Heart Disease›“To be or Not 2B” : Let us stop fooling around with premature scientific evidence !
Heart Disease

“To be or Not 2B” : Let us stop fooling around with premature scientific evidence !

Evidence-based medicine (EBM) is being projected as a scientific God’s secret specialty. Physicians who don’t follow EBM are considered unfit non-professionals. Presumably, in pursuit of truth, all those glamorous official bodies in cardiology bring out umpteen number of protocols, guidelines, advisories, and recommendations.

The blueprint for EBM

We have the famous 3 levels of recommendation backed up by different levels of evidence. Many of us trust these as the jury’s final verdict for most illnesses in cardiology. I would like to bring one particular issue about this hugely popular model of EBM. It is about one specific class of Indication referred to as 2b. The other day, there was an intense argument for an ICD in a young HCM patient and CRT in DCM based on this 2b stuff. Kindly request all of you to pause for a moment and introspect. We can realize, class 2b plays a mischievous game in EBM with the English language “may and may not”. It tries to push subconsciously an interventional bias from equipoise, in spite of lack of good evidence and clear divergence of opinion and a possible trend towards harm. 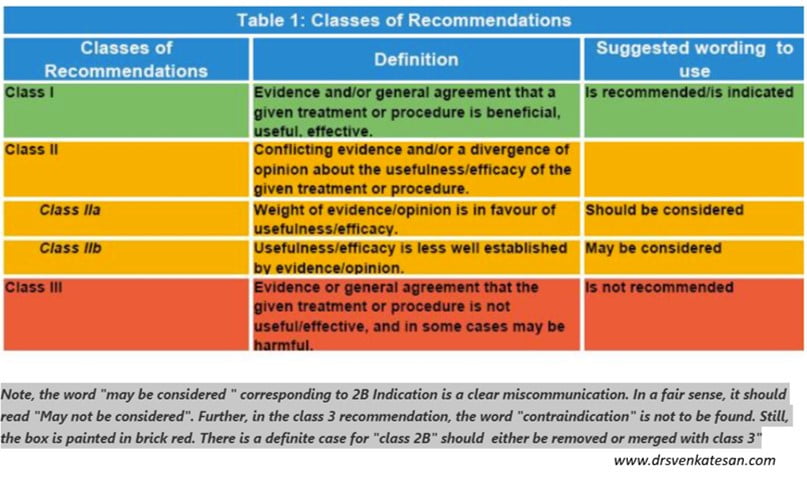 Further, there is widespread reluctance in many cardiac workgroups to refer class 3 recommendations as an absolute (or at least relative contraindication) It was strange to note one of my colleagues argued that,  class 3 is also a fair recommendation, to accept or reject is in our domain. I was initially shocked to hear that but had to agree with him ultimately as we realized a significant chunk of interventions we do, like delayed PCI > 24 hrs, CTOs, and chronic stable belongs to the proud class 3 recommendation. The debate came to a funny end when a senior cardiologist confessed somehow class 3 seemed to be a lesser evil than even class 2B.

For the sake of our patients, we need to bring an urgent reform in the EBM. Let us merge class 2b with class 3 and put it in a single basket and keep it out of reach to all tempting stakeholders. We shall display only class 1 in our therapeutic showcase.

(*Dynamic recommendations is the norm in science, as we accumulate evidence with time.. Agreed, let us do this silently in research labs. Don’t bring it to practical guidelines. No, can’t agree. Freedom to indulge with an experimental modality in a no-option patient must always be there as we are able to give the benefit of doubt to these helpless patients. This is a valid argument but we must not forget even in dire situations  good option need not be a compulsive action, it can be in action as well)

Can I Gain Muscle While Reducing Body Fat?

Safety Tips for Runners & How to Be an Ally