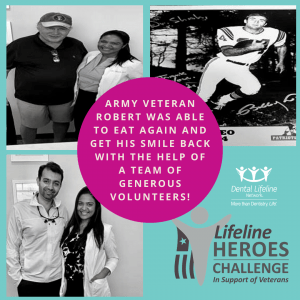 Robert is an elderly veteran of the U.S. Army and served in the National Guard as a soldier. Before joining the Army, he played for the Boston Patriots for a few years. Eventually Robert went to law school, earned his law degree, and practiced law for many years.

In 2011, Robert was involved in a terrible car accident that left him with a shoulder injury. He was diagnosed with PTSD and other mental health challenges, and was no longer able to work as a result. Robert also had serious unmet dental needs. Many of his teeth were decayed, and he had a chipped tooth that made it difficult to eat.

Unfortunately, Robert could not afford the dental treatment he needed. Although he had a well-paying job in the past, Robert now survives only on a small Social Security benefit that barely covers his expenses. It seemed he had nowhere to turn for help for the needed dental treatment.

Fortunately, Robert was referred to the Donated Dental Services (DDS) program and he was linked with four generous volunteers. Thanks to this team, Robert’s dental health was restored.

“We were fortunate to stumble across DLN through the “Will you see one Vet?” program. If every dentist in the country saw one vet, the number of vets dependent on the VA system would reduce drastically. We are in the fortunate position to be able to offer exemplary care in a much shorter period, and we believe we owe that much to those who have served the country. DLN makes the entire process seamless..” Dr. Dhara Shah, DDS Volunteer

Robert was very thankful for the team of volunteers that helped him eat again and restored his smile.

“Thank you for referring the dentist. I appreciate all the help I got from your program.” Robert, DDS patient

12 Ways to Boost Your Serotonin