Home›Health Care›What Is Monk Fruit Sweetener, and Is It Keto?
Health Care

What Is Monk Fruit Sweetener, and Is It Keto? 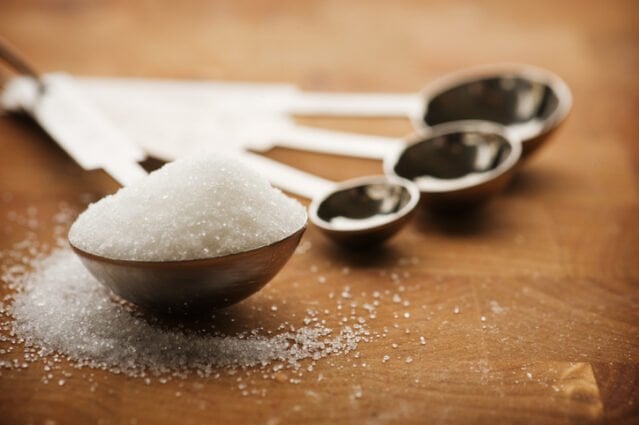 When you give up sugar, that doesn’t mean you have to give up sweet treats. You can find natural ways to satisfy your sweet tooth without spiking your blood sugar, and that doesn’t mean you have to resort to dangerous artificial sweeteners. Monk fruit is a keto community favorite ingredient to sweeten recipes, but what exactly is it, and where does it come from? Is there any research behind monk fruit? And how do we compare the various formulations next to each other in the supermarket aisle? Let’s break this down.

What Is Monk Fruit?

We’ve covered stevia, yacon syrup, allulose, and Swerve, but what about another popular choice in the growing selection of natural sweeteners — monk fruit? Known as Luo Han Guo in its native southern China, monk fruit (Siraitia grosvenorii) first found acclaim in the records of 13th century Luo Han Buddhist monks. The monks valued the natural sweetness of the fruit and made it their mission to cultivate the vines through the centuries. Today, most monk fruit cultivation still occurs in the misty mountains of China’s Guangxi province1 and a few surrounding areas, where the conditions are just right to grow and harvest the small, orange-sized fruits.

Monk fruit belongs to the cucurbit family alongside squash, cucumber, and watermelon. Fresh off the vine, the mini melons have a bitter outer rind encasing a sweet edible pulp and seeds. But unless you know someone who’s managed to cultivate monk fruit in their garden, you’re unlikely to eat a fresh monk fruit. The flesh degrades quickly, meaning most manufacturers dry monk fruit or process it so that it will make it to market.

Most monk fruit finds its way to American shelves as a concentrated natural sweetener. As always, the nature of that sweetener can vary markedly depending on how it was processed.

An average serving of pure monk fruit extract contains virtually no carbs, calories or sugars, which makes it a great choice to sweeten keto desserts and drinks.

It derives almost all of its sweetness from a group of antioxidants 2 called mogrosides, with mogroside V having a sweetness 250 times that of table sugar.3 To put that sweetness in perspective, most people consider just 1/64 of a teaspoon of monk fruit extract to taste as sweet as a full teaspoon of table sugar.

But to get this natural “zero calorie” sweetener, much of the natural compounds in the fruit are lost. Most producers treat “pure” monk fruit sweeteners  to remove off-flavors, then they dry it to remove other sulfurous volatiles. Finally, it gets homogenized and pasteurized. The resulting extract is very different from its original state, slightly undermining its purported status as a natural sweetener.

Other less processed natural monk fruit sweeteners provide a more wholesome version of the original fruit, but with the arguable downside of containing a small amount of glucose and fructose. More carbs also tend to mean fewer mogrosides, and hence a lower relative sweetness.

Contrary to what people might claim, fresh, unprocessed monk fruit is not sugar-free. It varies between cultivar and growing region. Still, fresh monk fruit is typically one-third carbohydrate, composed of a mix of fructose and glucose.

After you extract the juice, much of those carbs are left behind. At this point, a minimally-processed monk fruit extract sweetener might only contain small amounts of sugars in the form of fructose or glucose. At this point, it becomes a low-calorie natural sweetener. A half teaspoon serving of monk fruit juice powder, for example, is made up of 10% sugar, and the rest of the carbs presumably come from of mogrosides and other indigestible sweet-tasting compounds.

At the other end of the scale, pure monk fruit extracts are zero-calorie sweeteners, with no carbs and no sugar. Manufacturers are sometimes hesitant to sell straight monk fruit extract, however, because it’s easy to overdo it when you mix it into recipes. To add bulk, manufacturers will mix in small amounts of other sweeteners like erythritol or xylitol. It’s not uncommon to find sucrose or dextrose lurking on the ingredients list of so-called natural monk fruit sweeteners, but the amounts would be pretty minimal. Check labels to be sure.

While monk fruit contains several different mogrosides, 4 the key ingredient is generally mogroside V. This is easily the sweetest-tasting of all the compounds in monk fruit. Very conveniently, your body does not metabolize it in the same fashion as simple sugars like glucose or fructose. Your digestive system does not readily absorb Mogroside V. This accounts for the “zero calorie” claims of monk fruit extract products. It spells good news for those looking to satiate their sweet tooth while avoiding calorie loading or blood sugar spikes.

While the extraction and refining processes remove most of the original natural compounds from fresh monk fruit, research indicates that the mogrosides and other flavonoids that remain can still benefit your body. Here’s a brief look at some of the benefits (preventative and otherwise) you might enjoy using monk fruit sweeteners.

As Primal folks know, sugar (not fat) is the leading dietary cause of the obesity epidemic. And as the world has ever-so-slowly awakened to the notion that sugar might be doing the most damage, there’s been a push towards sweeteners that don’t elicit the same insulin-meddling, inflammation-elevating, liver-damaging effects as sugar. Preliminary evidence suggests that the mogrosides in monk fruit sweeteners might be just the ticket. A 2012 study showed that total mogrosides extracted from monk fruit “suppressed the increase in body weight, abdominal and epididymal fats weight” in mice placed on a high-fat diet (presumably not good fats).5 Another study showed that obese mice fed mogrosides from monk fruit had significantly reduced body and liver weights compared to control mice.6 Researchers thought that the mogrosides achieved this anti-obesity effect by “enhancing fat metabolism and antioxidative defenses.”

We need more research to verify these findings, especially in humans. But its a promising start.

READ NEXT: Does Monk Fruit Break a Fast?

There has been plenty of research into the potential antidiabetic effect of mogrosides found in monk fruit sweeteners. In one study, mogroside extracts from monk fruit administered to diabetic rats significantly eased symptoms and protected against biochemical abnormalities.7

Yet another study showed that both crude monk fruit extract and mogroside V helped to stimulate the secretion of insulin in pancreatic beta cells.9

You get the idea. Once again, more studies in humans are needed to make any definitive conclusions.

Here are some tested and true recipes that use monk fruit:

While research is very much in its infancy regarding the link between monk fruit and cancer, there’s likely to be more on the horizon. A 2016 study 10 used mogroside IV, extracted from monk fruit, to inhibit the proliferation of both colorectal and throat cancer cells and suppress tumor growth. An earlier study 11 showed that a range of triterpenoids (including several mogrosides) isolated from monk fruit showed “potent inhibitory effects” on Eppstein-Barr Virus-induced tumor growth.

It makes plenty of sense, as multiple studies have highlighted the antioxidant 12 powers of mogrosides found in monk fruit sweeteners.

A 2011 study indicated that mogrosides administered to mice significantly reduced inflammation by quieting genes that trigger inflammation and up-regulating anti-inflammatory genes.13
More than half of a more recent study demonstrated the ability of mogroside V to lower induced lung inflammation in mice.14 Researchers have shown that monk fruit extracts reduce physical fatigue in mice (allowing them to swim for longer).15 We can assume that this is at least partially attributed to monk fruit’s anti-inflammatory compounds.

The health-giving powers of monk fruit sweeteners may even extend to immune function. In one study, scientists fed groups of diabetic mice low-dose mogrosides, high-dose mogrosides, or a saline control solution over a month.16 At the end of the trial, both mogroside groups (but particularly the low-dose group) showed significant protection against diabetes-induced immune dysfunction. Interestingly, this immune-bolstering effect was only apparent in immune-suppressed diabetic mice, suggesting it plays a vital role in restoring homeostasis in the body.

Long-term, multi-year toxicity trials the best way to evaluate safety, but so far, no tests have yet revealed anything of concern. People sometimes report digestive discomfort with monk fruit, but some say that it would be due to other things that are mixed with the monk fruit (like xylitol or erythritol) and not the monk fruit itself.

The FDA gave monk fruit products their generally recognized as safe (GRAS) seal of approval in 2010, and it’s of some note that monk fruit has been cultivated and eaten since at least the 13th century, albeit at far lower concentrations.

Limited trials in humans haven’t reported any adverse effects, and a study in mice showed that, mice who consumed high dosages did not experience toxic or mutagenic effects.18 That said, the use of highly concentrated monk fruit sweeteners is very much in its infancy. Moderation is a safe bet.

Which product you choose will depend on your preference. Those who prefer an entirely non-caloric formulation will want to go with pure monk fruit extract. Or you may prioritize less-processed versions, which might contain a small amount of simple sugars and a little less mogroside.

At the other end of the spectrum, those who have a hard time measuring pure monk fruit, or want to cut down on the aftertaste might opt for a blended product that includes erythritol, xylitol, and stevia.

While most people enjoy the taste of monk fruit, it’s not necessarily for everyone. Taste descriptors vary markedly from person to person, with some noting it tastes like caramel or molasses, others more like sweet licorice. Keep in mind that the more refined the monk fruit sweetener, the more it loses its butterscotch character, and the sweeter it will taste.

And speaking of sweetness, remember that mogroside V, the key ingredient in most monk fruit sweeteners, is up to 250 times sweeter than sugar, so a little goes a long way. Most labels provide a sugar substitution guide for recipes.

How to Use Monk Fruit Sweetener

How you use monk fruit sweeteners will also depend on your taste preferences. Some common uses include:

That’s just the beginning. Experiment, and see how it might work for you and your family.

Thanks for stopping by, folks. Have you used monk fruit as a sweetener, or would you consider trying it? Be sure to share your thoughts below.

The post What Is Monk Fruit Sweetener, and Is It Keto? appeared first on Mark's Daily Apple.

The Patient Perspective: Patient Influencers and The Impact of Authenticity