When to revascularise in stable CAD: A Single slide presentation

This graph is a rare treasure in CAD therapeutics (fished out from essentially meaningless, often dangerous statistical curves littered in chronic CAD literature) that elegantly shows us the complexities involved in the revascularization of ischemic hearts with risks and benefits criss-cross each other. Our job is to identify, that critical point in a given patient’s CAD timeline. To make things difficult, this point is a moving target and makes this delicate clinical exercise truly complicated. 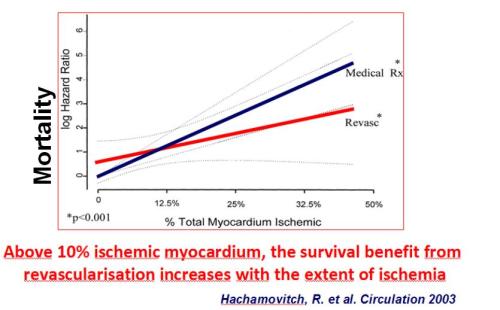 It conveys a simple message in strong terms. It says the inflection point is around 10-15%. When the total ischemic areas are beyond this the benefits increase and when it is less there is sure shot harm.

Now comes the tough part. How best we can identify and quantify the true area of ischemia?

There is no such thing called coronary mathematics. Even if we try to make out one, vascular biology will giggle at us. Still, we have no other option but to go for sophisticated imaging modalities. Stress Echo, Nuclear Imaging, Scar imaging, MRI, PET, quantify total ischemic burden, plot it with corresponding coronary anatomical zones for a potential correction.

What this curve does not convey is the complex interplay between Ischemia vs symptoms. Ischemic myocytes have so many invisible tricks to adopt themselves. Should I go after the burden of Ischemia (Often Imaginary) or the burden of symptoms? Despite the lack of benefit in most trials on CTO in hard endpoints, it is yet to rectify many of the elite evidence-based cardiologist thinking patterns.

However, It will be an unpardonable act of omission if we miss or fail to offer the benefit of opening a critical LAD disease that has troublesome symptoms.

How To Lose Weight During Navratri-Diet Plan & Tips